With their gravelly vocals and harsh, grungy guitar sounds, this blues-rock band from Bournemouth have really made an impression locally and will be supporting legends The Buzzcocks at Mr Kyps next month. 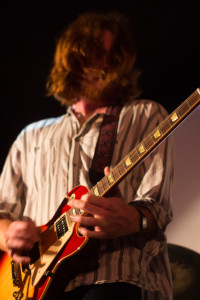 Jordan Gray, Craig Gray and Nick Scott make up the band and their debut EP shows us the best of Mountain Feet, with five tracks that set out what the band is all about.

Track 1- Having A Ball

Jordan Gray’s vocals are similar to those of Jon Fratelli and Guy Garvey but with the raw power of Kurt Cobain, which lends itself brilliantly to this song.

With a raucous, grungy riff and a deep, moving bassline, this song is exactly what you’d expect to hear at Reading and Leeds.

There is a real focus on the guitar, with an amazing intro and a screeching guitar melodically dancing through the song, with a slight nod to glam rock in places, which is really reflected in the guitar solo.

With its dramatic, dark and moody start, this song suddenly launches from the blues influences with a kick into the chorus; the raw power of the vocals being shown beautifully.

The drums, guitar and bass all work beautifully, especially in the breakdown halfway through the song, which is a real headbanger.

This song is amazing, the moody nature of the track is really emotive and the guitar solo is incredible.

There is a definite shift with this song, it’s much more calming and folk inspired.

With a blues-y intro and soft drums, this song is reminiscent of Bob Dylan and would be the perfect summer soundtrack.

The lyrics are similar to those of Bowie and The Kinks, very descriptive and poetic.

This song reminds me of those written by The Fratellis, in their blues style but overall, I prefer it!

My one criticism is that by this point in the EP, there seems to be too much of a focus on guitar solos and this one seemed too long, and I’d prefer it if this song reached a climax without the need of a long guitar solo.

Track 4- That Ain’t The Way

With a catchy intro and Hendrix-inspired vocals, this song launches into a riff that sounds like it was written by The Stones.

This foot-stomper is a non-stop musical journey with strong influences from throughout the 70s, making it irresistible to sing along to.

The guitar solo has a real edge in this song, with just the right amount of movement and distortion to not lose the listeners interest and keeps the song moving nicely.

Track 5- Praying For You

Hey Joe sounds like it heavily infulenced the intro to this song, with the effects sounding like they were used by Floyd - this is in no way a bad thing.

Jordan sings with such emotion and power, making this song really dynamic, and also bringing out some elements of the Red Hot Chilli Peppers sound.

A brilliant end to a great EP by a band with real potential.

Check them out on Facebook, Soundcloud or get tickets to see them support The Buzzcocks at Mr Kyps in Poole here.