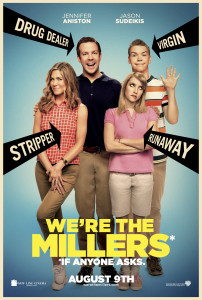 TAKING THE SQUEAKY-CLEAN FAMILY TO A WHOLE NEW LEVEL.

We’re The Millers, WHAT a comedy,  turning a freaky “family” into a fabulous one.

Pot dealer David, (Jason Sudeikis) is forced to smuggle drugs by his supplier (Ed Helm). David sets off to Mexico to get a “smidge” of drugs, but he needs a disguise. So, to create the pretence of a family holiday, he hires stripper (Jennifer Aniston), a homeless girl (Emma Roberts) and a virgin (Will Poulter) to join him on the highway to hell.

The cast is marvellous and absolutely funny, Jason Sudeikis is a comedy improvising genius and he always creates laughs, as for Jennifer Aniston, this is her best film yet!

By the co-writers Bob Fisher and Steve Faber (who wrote the successful Wedding Crashers in 2005). These two guys create some genuinely funny lines, like “F**k off real-life Flanders”. The plot structure is predictable, as it is easy to guess the ending that said, the heart of the film is comically brilliant.

We’re The Millers might not be everyone’s cup of tea, because of the crazy concept that is politically incorrect. For others, We’re The Millers can be a goofy road-trip that is full of pure gags.

Director Rawson Marshall Thurber, whose big film debut was Dodgeball: A True Underdog Story (2004), proves that he can make enjoyable films with unexpected and crude humour.

The outtakes at the end of the film are worth watching too.

We’re The Millers, the “squeaky-clean family” who get involved with swingers, drug trafficking and strip-tease…isn’t that the way road trips are supposed to go?!