Vandals who damaged the Media School Hall of Fame at Bournemouth University have been caught. 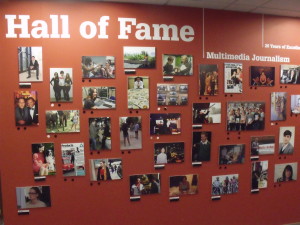 The Media School Hall of Fame showcases images of students from the BA (Hons) Multimedia Journalism course during their industry work placements.

Last week, lecturers at BU discovered that the Media School Hall of Fame had been victim to an act of vandalism.

The names of successful students were ripped from the wall on the third floor of Weymouth House, and pictures were torn.

Analysis of CCTV footage revealed the identities of the perpetrators and the university investigation is ongoing.

It is now restored to its previous state.

The Media School Hall of Fame was unveiled in 2012 to mark the 20th anniversary of the NCTJ-accredited Multimedia Journalism course at BU.

Photographs on the wall feature students working with outlets as varied as Heat, GQ, ITV Meridian and the Bournemouth Echo.