On November 11, a generation brought up on early Noughties pop rock was sent into overdrive. Their prayers had been answered. McBusted had arrived. And the crowd at the Bournemouth International Centre on April 21 were certainly pleased to see them. 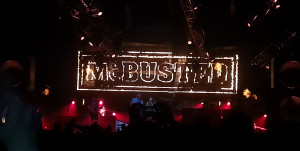 McBusted are certainly not afraid of putting on a high-energy show, packed with nostalgia and reverence for the past. Opening with Busted’s 2004 hit ‘Air Hostess’, the gig is almost two hours of running, jumping and chaos book-ended by loving references to the Back to the Future movies.

By the time an enormous trio of breasts descends from the ceiling for closing number ‘Year 3000′, the show has already cemented itself as a real once in a lifetime experience.

The two bands mesh together as if they have been working as a supergroup for their entire careers. Absent Busted member Charlie Simpson is not missed as the six-piece make their mark on pop history without him. Their on-stage chemistry is brilliant, whether it’s the gentle ribbing of Tom Fletcher’s YouTube career or the increasingly crude bromance involving Matt Willis and Dougie Poynter.

The show feels like a trip down memory lane - at breakneck pace. Wasting little time between tracks, McBusted power through the respective back catalogues of both bands. They each slip into the other band’s tracks so comfortably that it’s as if they’ve never been apart.

As well as the hits that made both bands famous, McBusted find time to pay service to fan favourite tracks like ‘Nerdy’ and ‘Britney’ that weren’t massive smash hits. It is these loving touches to their fanbase that make the group such a joy to listen to.

Throughout, the vocals are strong, and there’s no shortage of memorable moments. This is certainly a show that everyone in attendance will remember for a long time. It could easily have been a tired retread of the music that was popular ten years ago, but instead, it’s an exhilarating evening of the finest in pop rock.

There’s a real inventiveness throughout the show as well, with innovative set design, crazy costumes and prop work that goes from the sublime to the ridiculous with consummate ease.

At times, the McBusted Tour is like looking into the lives of six men acting out all of their childhood fantasies in front of several thousand people.

More than anything else, they’re having a ball and it’s impossible not to enjoy that.

McBusted are set to play Bournemouth again tonight, followed by two more dates on May 28-29. The Rock has exclusive backstage access to tonight’s show, where we will be chatting to support act EofE. Follow us on Twitter to see our backstage tweets and pictures.