SOUTHERN League Premier leaders Poole Town were held at home by King’s Lynn Town yesterday, with a combination of wasteful finishing and brilliant goalkeeping ensuring the Linnets returned home with a share of the spoils.

After early Poole pressure, King’s Lynn took the lead against the run of play with Sam Mulready heading home Michael Clunan’s delightful cross just after the half hour mark.

Poole threw the kitchen sink at King’s Lynn in search of an equaliser and the pressure finally paid off in the 78th minute, after a mistake by Matthew Castellan allowed super sub Richard Gillespie to slot home when one-on-one with Linnets keeper Alexander Street to make it 1-1.

However, Poole’s search for a late winner proved unsuccessful and the Dolphins will feel disappointed not to take the points after a good performance against a solid King’s Lynn outfit.

King’s Lynn went into the game having played three times since Poole’s last match on Boxing Day, so one may have expected the Linnets to look the sharper of the two sides early on. However, it was all Poole for the first 15 minutes at a bitterly cold Tatnam.

The first chance of the game came when Steve Devlin curled a beautiful free-kick over the wall after just two minutes, but Street saved well to deny the Dolphins top scorer.

Devlin tried his luck again shortly after, volleying over from 25 yards after good work from Luke Burbidge on the right hand side.

King’s Lynn struggled to get hold of the ball in the early stages, and will thank Street for keeping them level with two great saves in quick succession.

Marvin Brooks split the Linnets defence in two to send Burbidge through but Street got down well to prevent him and then produced a tremendous save to deny Jack Dickson from smashing home from inside the box.

The Linnets then had a great chance to take the lead against the run of play, Jack Zielonka fed Lee Stevenson who span brilliantly on the edge of the area and just fired past the post. 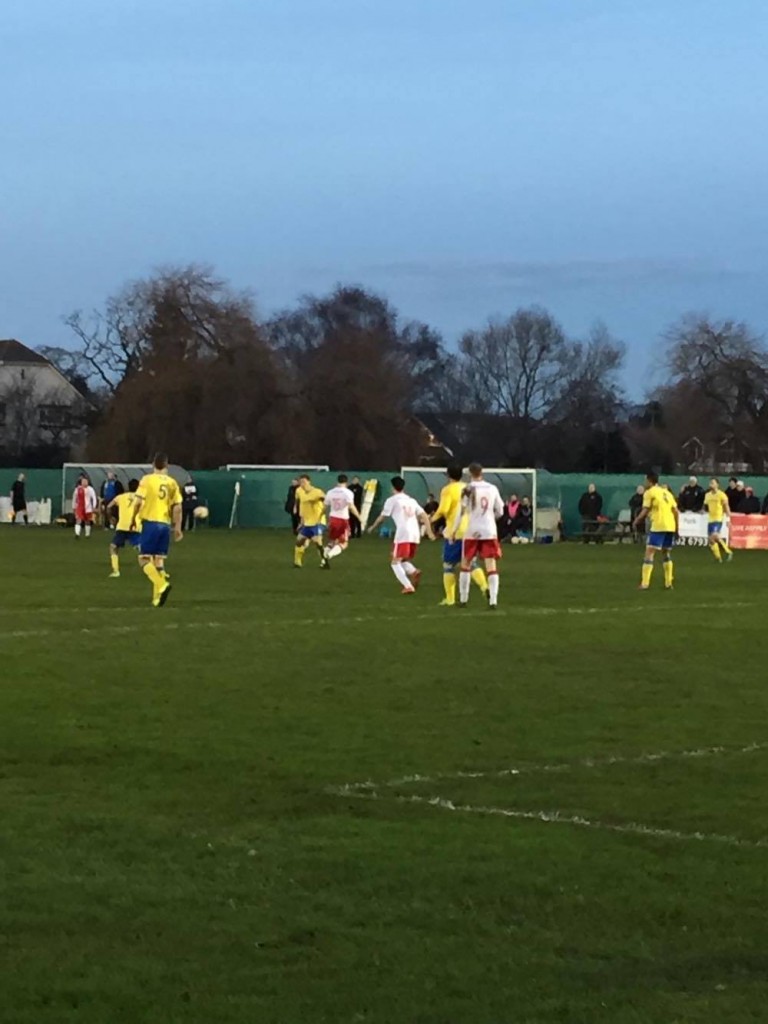 King’s Lynn started to settle down after 20 minutes, and began to enjoy more of the ball. Nick Hutchins had to be alert to keep out Linnets’ captain Ryan Fryatt.

King’s Lynn then took the lead after 32 minutes. Michael Walker was alleged to have handled the ball on the edge of the 18-yard-box and the Linnets scored from the resulting free kick. Mulready found himself completely unmarked at the back post and met Clunan’s cross to head home clinically from close range.

The Linnets should have doubled their lead shortly after. After good work from Fryatt down the right hand side, he squared to Zielonka who lacked composure and smashed the ball over from 12 yards.

Lee Wort had a good chance to equalise for the Dolphins’ before half time, but Street again was there to block the shot from the Dolphins’ powerful number 9.

The second half started slowly and the best action of the first 15 minutes after the break was two weak headers from Poole, both saved by Street, from Dickson and Jamie Whiskin respectively.

Poole’s tricky winger Burbidge found himself one on one shortly after the hour mark, but nicked it just past the post when you felt he had to score.

This signalled the start of the Poole Town onslaught and substitute Luke Roberts had his shot blocked after great work from Wort.

Shortly after the Linnets finally caved in and super sub Gillespie clinically finished just three minutes after coming on, when Castellan messed up his clearance to send Gillespie through with a simple one-on-one.

King’s Lynn almost responded immediately, but Mulready couldn’t quite connect with Liam Hurst’s teasing ball in from the left hand side.

The Linnets were really hanging on in the last ten minutes, and Devlin almost won it for Poole but he saw his 25 yard drive come crashing back off the underside of the bar.

Gillespie’s flicked header then provided Wort with the perfect chance to take all three points, only for Wort to completely miss the ball from two yards when any connection would have surely resulted in a goal.

This was followed by the final whistle which capped a frustrating afternoon for Poole Town who will feel like they should have taken all three points. However, Kings Lynn produced a very solid performance and will travel back to Norfolk happy after taking a point at the home of the league leaders.

The result leaves Poole four points clear and the top of the Southern Premier and King’s Lynn move into the top ten, just four points off Redditch United in third position.

Poole Town have extended their lead at the top of the Southern League Premier to eight points after comfortably beating 9-man Leamington 1-0 on Saturday.

Dolphins extend lead at the top

Poole Town strengthened their lead at the top of the Southern League Premier last night with a convincing 3-0 victory against Chesham United at Tatnam.

Most football fans would agree it’s been a good season for football on the South Coast so far.