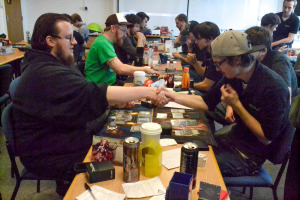 Players came from all over the UK to compete in the trials for the chance to win 2 free wins in the Magic the Gathering Madrid grand prix. The turnout at the Bournemouth University trials was bigger than expected with 22 players competing for this opportunity.

The game kicked off at 11am on Saturday morning. Many of the attendees were experienced players and had spent all week perfecting their decks for this opportunity in the grand prix.

Many came to the trial because their friends were coming and for a more competitive game. However, they didnā€™t have to win the trial to attend the grand prix in Madrid.

The format of the grand prix trial was modern; the players can use cards from older sets. There were 5 rounds of fifty minutes, each consisting of 3 games. At the end of those rounds there were 8 leading players who will compete with each other at a later date for those 2 free wins.

Torran Brewers found he was unprepared for the favouredĀ burnĀ decks of this particular MTG group, “I have lots of small creatures which will stall them but nothing really effective against them.”

Some players knew from the beginning who was going to be in the top 8. Alex Mortimer wasnā€™t doing well and wished heā€™d brought a different deck. He said that the winner is “likely going to be the guy I played in the first round. Tim, over there on table 1.” 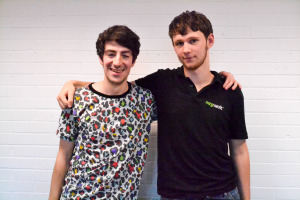 Louis Davies attended with “all of [his] buddies just to play a few games” and came 8th in the runnings but unfortunately didnā€™t win any good cards in his booster packs.

The winners of the day were Sean Knowleden and Tim Lansdale. Sean said that winning is only part of the fun, “I came to see people I havenā€™t seen in a while [and] I like the community.” Timā€™s opponents joked about his expensive deck and itā€™s bullying tactics, but he attended because he was going to Madrid in November anyway.

Four of the winning 8 players dropped out for a variety of reasons, such as not being able to afford the trip to Madrid. Soon another game will take place were the final 4 battle it out for those 2 free wins in the Madrid grand prix.