As a moody, smart and funny take on vampires in the Rock ‘n’ Roll lifestyle, this art house film is on a different level to popular vampire movies such as  Twilight. 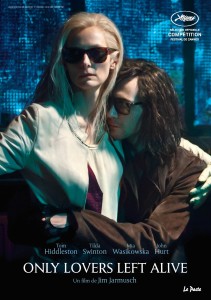 Only Lovers Left Alive is excellent and moody with a gifted cast that brings vampires into the Rock ‘n’ Roll lifestyle. Ageless vampire Adam (Tom Hiddleston) reunites with his nomadic, blood-drinking wife Eve (Tilda Swinton) to help lift him from his heavy funk.

Tom Hiddleston and Tilda Swinton were beautiful and phenomenal in Only Lovers Left Alive. Adam is a grouch, who lives in the past whilst Eve is warm and wry, who is engaged with the modern world. Byronic musician Hiddleston suits the Rock ‘n’ Roll demeanour and Swinton shines as an edgy vampire.

Adam and Eve’s reunion is ruined when Eve’s troublesome baby sister Ava (Mia Wasikowska) comes to visit and when vampire friend Christopher Marlowe (the English dramatist and poet who influenced William Shakespeare), played by the sensational John Hurt, finds himself in trouble.

Only Lovers Left Alive is no Twilight. These vampires are smart, funny and sexy creatures of the night. Director Jim Jarmusch shot the whole film at night and gives us a sense of realism of a vampire’s life. Jarmusch has generated a masterpiece about a lonely couple whose only comfort is each other. The marvellous thing about Jarmusch’s screenplay is the culture references and when humans are belittled as ‘zombies’. This film has art house written all over it.

The plot is nothing to get excited about, but that is what makes the film more beautiful. This art house film is a celebration of life, beauty, love, humanity and so many others things.

The soundtrack is, to any music lover, to die for. The writer and director also scored the soundtrack with his band Sqürl and teamed with Jozek Van Wissem. They’ve invented a terrific set of music for the film. There is a beautiful selection of classic soul jam, straight up Rock ‘n’ Roll, and adventurous Middle Eastern music in the film too.

Only Lovers Left Alive is the hip and moody take on vampires and with a central cast like Tom Hiddleston and Tilda Swinton, this film is worth a watch.