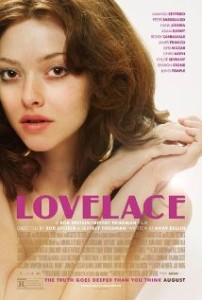 Lovelace the real life drama of the 70’s. Deep Throat star Linda Lovelace and the looping plot dignifies the elegance of portraying the hidden life of Lovelace.

The story shows the different sides to Linda Lovelace and how she is perceived by different people, realising that the only positive man in her life is Mafia-associated producer Anthony Romano (Chris Noth).

Lovelace brings the 70’s to life but the compelling biopic of Linda Lovelace can be seen incomplete, as we do not see the full Lovelace story. Lovelace’s life as a spokesperson for an anti-pornography movement is not seen or spoken of and the nastier take of Linda’s abused life feels restricted.

Lovelace is not all about showbiz and orgasms; it is about the exploitation and brutal story of Linda Lovelace’s life, all the while bringing the disco scene to a more dramatic focus.

SUBBER’S NOTES: Avoid repetition ‘the looping story’, used twice. Not even sure what you mean by that.