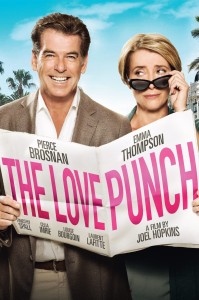 The Love Punch is a guilty pleasure for anyone in the mood for light-hearted escapism.

The Love Punch is a cheerfully unlikely heist comedy, targeted for over-50s but us young folk still can have a giggle.

Businessman Richard (Pierce Brosnan) has a dream of a comfortable retirement that is left in tatters when a French executive shreds his nest egg in a hostile takeover. Not taking it laying down, Richard teams up with his ex-wife Kate (Emma Thompson) and the pair hatches a plan to steal a diamond from him.

It is old fashioned, writer/director Joel Hopkins - who previously cast Emma Thompson in grown up romantic comedy Last Chance Harvey (2008) - is like a mad slapstick caper that Katherine Hepburn and Cary Grant might have seen in the 1930s. This is why the older generation will love it. Film makers might not make films like they used to back in the day, but at least this film tries.

The Love Punch has its occasional amusing moments but the nature of the plot is a bunch of nonsense. However, the stars and the sunny setting make this film an acceptable guilty pleasure for the older generation but still a laugh for the younger generation.

The chemistry between Pierce Brosnan and Emma Thompson sparkles like a diamond (like the one they are stealing). Emma Thompson steals the spotlight when it comes to the quick-fire dialogue but they both make all of the silly situations fun. The supporting actors, Celia Imrie and Timothy Spall as the next door neighbours, are a brilliant addition. The cast’s easy harmony is definitely what makes the film.

The Love Punch is a fun to watch film and perfect gift for the parents when it comes out on DVD.