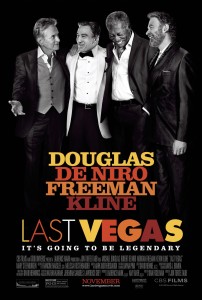 Last Vegas is all about those age jokes and that close friendship where you insult each other. It is the cast who bring it out of the bag to deliver an amusing film.

Four school friends reunite for a stag party in Vegas, where the groom Billy (Michael Douglas) immediately connects with a lounge singer (Mary Steenburgen). Frail but feisty Archie (Morgan Freeman) hits the jackpot and gets VIP treatment, along with Billy, widower (Robert De Niro) and their married friend (Kevin Kline).

The opening scenes are entertaining and provide an insight to the characters’ lives. It also allows the actors to set up their personalities. Once the story kicks in, the film gets a bit wilder especially for a bunch of OAPs.

The cast is the winning hand throughout the film and it brings the humour to a new level. With gags about aching limbs or their fascination of the young and beautiful, Last Vegas is as fetching as The Hangover (2009).

The script from Dan Fogelmand (Crazy Stupid Love) connected with the characteristics of the older generation creates a likeable and enjoyable crowd-pleaser.

We see De Niro as a miserable grump, Douglas as the fake-tanned singleton and Freeman as an outrageous drunk but Kline undoubtedly steals the show. It is really worth a watch.