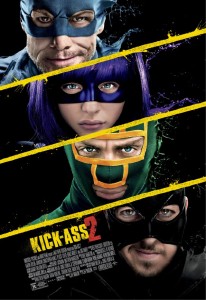 FELL SHORT OF KICKING-ASS AND MORE SELF-IDENTITY WITH BLOOD

Kick Ass 2’s humour fell short of the unique original and sadly failed to express the beauty of violent imagery.

Hit-Girl was the coolest superhero in Kick Ass (2010) and in its sequel, she does not disappoint. Her storyline in the film is fierce and amusing. Kick Ass 2 expands its super roster but in doing so fails to provide in-depth background plot for the supporting characters, especially the evil gang The Toxic Megacunts. Mother Russia is action-packed and super violent, as she brings the WOW factor for the evil gang, while The Motherfucker AKA Chris TRIES to stand out as the lead villain.

There are some shocking moments, even though with Kick-Ass as the title, it is quite impressive that death is so surprising and for the more emotional, a little heart-breaking. The humour is a little over-the-top, although for character development it might be needed. For instance “The Motherfucker” discovering his outfit and expressing the breakdown of his alias,Chris, just like the crowd control shock baton scene expresses Mindy’s ironic humour and fighting attitude.

Kick Ass 2 is a modest sequel to Kick Ass, but does not blow our minds and represent the R-rated violence and ironic humour that the 2010 was successful for.