The writer-director of upcoming movie K-Shop, has praised the “incredible energy” he experienced when shooting his darkly comic thriller in Bournemouth’s town centre. 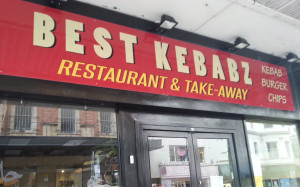 K-Shop, which focuses on a kebab shop owner driven to murder by the horrors of British binge drinking culture, began filming back in the spring, using a disused shopfront in Gervis Road as its main location.

“Shooting in Bournemouth gave the film an incredible energy that we probably wouldn’t have had anywhere else,” said filmmaker Dan Pringle.

“On some of the bank holidays, the cast and crew could see the carnage that was out on the streets.

“They could see exactly what we were trying to reflect and that leant the production an energy that fed perfectly into the way everybody was operating.”

K-Shop was inspired by the binge drinking culture in Bournemouth, which Dan experienced when his production company White Lantern Film moved into new offices in the town centre, within touching distance of a number of pubs and clubs.

Despite the debt it owes to Dorset, Dan is keen to emphasise that K-Shop is “not a film about Bournemouth” and aims for a broader depiction of Britain and its problems with excessive alcohol consumption.

He said: “It’s a film about British drinking culture, which could take place on any high street or city centre around the UK.

“It was always important to try and maintain that faceless British town image because we didn’t want to say anything about any specific place.

“We want it to be broader than that and paint a picture of British nightlife that transcends locality.”

The town centre location gave the film’s month-long shoot a real dose of reality, with members of the public getting a little too close for comfort after closing time.

“Because the set was in the town centre, we’d get people coming up to the kebab shop on night shoots trying to get in and interact with us in the same way we were trying to portray on camera,” said Dan.

“There was this incredible irony to what we were doing and I think that’s where Bournemouth played its part.”

There are plans for Dan and White Lantern’s next film to also take advantage of the company’s south coast location, with a very different piece of work in the pipeline.

“There is another film to be shot in Dorset that lends itself well to being the next stepping stone for me as a filmmaker,” he said.

“I guess you could call it a sci-fi, but it could also be described as a bit of a horror as well.

“If all goes to plan, that’ll be the next one but it’s all entirely dependent on K-Shop.”

K-Shop is currently in the final touches of the post-production stage, with White Lantern Film eyeing a release date in April-May 2015.