MCCARTHY BRINGS SCENE-STEALING ACTING TO THE TABLE AND THE HEAT IS SIZZLING! 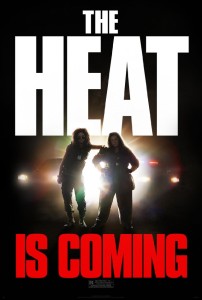 The Heat is packed full of funniness and the temperature is only sizzling, with the overplayed gags and predictable plot.

FBI Agent Sarah Ashburn (Sandra Bullock) has to move to Boston to track down a drug lord, Larkin. She is forced to work with local Cop Shannon Mullins (Melissa McCarthy) and they quickly clash, but bond as the investigation continues. With sexist DEA Agents at Larkin’s tail, can these feisty women get there first?

The Heat’s main humour comes from scene-stealing McCarthy, her acting talent glows here with her improvised insults, as she plays an aggressive tomboy Cop with a sarcastic wit.

Bullock has a less stand-out role as she plays Ashburn, an arrogant “know it all”, workaholic, “Good Cop”, agent who is unpopular to say the least with her fellow colleagues. She is there to expose the horror of Mullin’s unprofessionalism and “Bad Cop” antics.

The film follows the basic plot of starting high, crash-and-burn middle and kick-ass finale. Ashburn and Mullins are undermined by everyone in the force and end up bonding on an alcohol fuelled wild night out. This serves to bring Ashburn out of her shell and brings the two cops together to become “The Heat”.

The Heat has memorable scenes and the dialogue brings the performances to an entertaining climax. Such as, Mullins looking around her boss’ office searching for his UNMENTIONABLES… surprisingly, Mullin’s boss is none other than Back To The Future’s Biff Tannen (Thomas F. Wilson).

Like Bridesmaids, another one of Melissa McCarthy’s cracking films, by the same director Paul Feig, has potential. The serious message it seems that the film brings to the audience for instance, gender inequality in the workplace.

The little hiccup with The Heat is the overplayed gags. The Jesus playing sports paintings would have been funnier as a quick gag and not an overrunning joke.

The Heat is a film to watch, and brings the good and bad Cop to the extreme and always proves that any Melissa McCarthy film is a hit.