Four members of the LGBT society at BU have had very different lives growing up as gay, and their takes on what the passage of the same-sex marriage bill means to them are greatly varied. On one point, however, they all agree: even in the UK there is still a long way to go until total equality is reached. 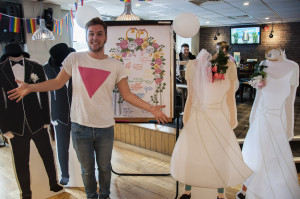 The marriage (same-sex) bill was passed in July last year, but only in late March were the first same-sex weddings seen to take place in the UK. To celebrate the occasion, LGBT Welfare Officer Billy Wright and a team of SUBU officers organised an event at university.

Billy can remember being interested in both boys and girls as a child, and said the gendered attitudes are forced upon children by parents, without them noticing they are doing it.

“When we are kids we all want to be prime ministers and astronauts, it doesn’t matter if you are a boy or a girl. When you ask again when at 15 the girls want to do beauty and fashion the boys want to do football” said Billy.

Although his parents were accepting of his sexuality, Billy recalls having a hard time in secondary school, with no friends that he could turn to and confide in. When he eventually came out at the age of 14, he was surprised by the reaction he received, as they were all supportive. The fear was all in his head, he said, caused by people making jokes when they are unaware of anyone taking offence.

That gay people can now get married does not only means a lot to Billy personally, but he also said it is important for the wellbeing of all LGBT people.

“The fact that we now recognise that we are equal is so important for our own wellbeing. Gay males are six times more likely to commit suicide than heterosexual counterparts, and we have it good in this country, it is probably one of the best countries when it comes to gay rights. Things like that make me feel like we still have a long way to go.

“Gay rights are human rights, and we all deserve our rights. If you don’t fight for other’s, how can you expect them to fight for yours,” said Billy. 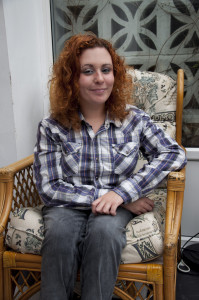 Charlotte Grace Fodor is a second year English student. She grew up in Bournemouth, a fact she considers herself lucky for because it is a relatively gay-friendly town. In her group of friends several girls said they were bisexual at a time.

“I came out as bisexual when I was 12, but didn’t tell anyone I was gay before I was 16. It was easier to say I was bi, because I could still talk about guys and throw in the odd comment about girls,” said Charlotte.

She considers it easier for women to be gay than men, as there is a whole voyeuristic element of lesbians. But there are still issues to overcome when it comes to understanding and accepting, she said.

“I get a lot of comments about who’s the man in your relationship. What I say to them is that it’s like asking which chopstick is the fork. I also get some really inappropriate comments saying how do lesbians have sex, and stuff like that. When I tell people I’m gay they can be a bit forward even if they don’t know me, and that makes me uncomfortable,” said Charlotte.

Charlotte is not religious so she probably will not get married anyway. But she realises how much it means for gay religious couples to have the opportunity to consummate their love in a way coherent with their beliefs.

Eventually, she hopes gay marriages can lead to a deeper understanding of each other.

“I hope it will cause a shift in people’s attitudes towards gay people in terms of religion. But it is going to take a long time, unfortunately. At the end of the day there’s still a lot of hate out there, so it’s going to take time.

“England is probably a good place to be gay compared with other places, but we still have a long way to go. It’s still this whole thing about “gay” marriage – why can’t we just call it marriage? You wouldn’t say ‘I’m going to a straight wedding’”, said Charlotte. 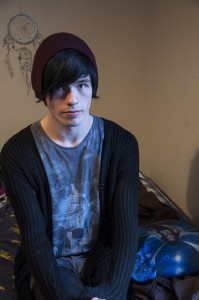 Jynx Smith has experienced several homophobic attacks, and is grateful for the support of gay marriage. © Hailey Hammer

Jynx Smith studies TV Production in his first year, and grew up in South-East London. His experiences of homophobia are many, and some quite severe. In his youth he received a lot of comments about “bum-sex”, and one episode got so out of hand he was pushed to the ground and had his arm kicked around a pole, so hard that it broke.

“It was really, really painful and I had to take myself to hospital. I told my mum I fell down the stairs,” said Jynx.

Another attack happened when he was 17, where he was approached by several men who started shouting comments at him. Jynx tried to speed up to get away, but the men followed.

“They pinned me down to the ground and this guy pulled out a knife. I remember very specifically because when he held it up I could see it in the street-light. And I thought ‘Oh my god, I am going to die. This is it, this is the end of my life,” said Jynx.

He got away by pushing the men off and running as fast as he could.

That Jynx can now get married if he wants to is for him a token of support from society.

“It means that I can get married if I choose to, as opposed to having to be worried about more discrimination. Before, it felt like society was attacking our right to fall in love and to commit legally to that love.

“Generally, I think it shows that gay rights are developing and they are making breakthroughs. People have to be understanding and change the way that they think. A lot of people are affected by the crowd effect, so when enough people do something they will come around to it,” he said. 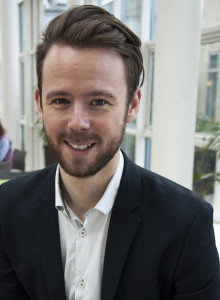 Ten years ago, Tom Lee Clowes never thought he would get married. But he is, this July. © Hailey Hammer

Tom Lee Clowes, 28, is a first year English student, and is getting married to his partner Nick on 26 July this year. He grew up “all over the place”, and experienced some hardship because of his sexuality that led him to grow a very thick skin. In college he had a good friend who would come to his defence whenever someone were being rude.

“I had a friend, Alex, who was a strong girl who played hockey who would always defend me. She was actually gay herself, but struggled a lot with it. After I moved away she started working as a prison guard, but our contact gradually faded out. I found out later that she had hung herself,” Tom said.

Jynx also had a friend who chose to take her own life because of homophobic bullying, which only proves that there still are issues to tackle in the UK. Tom thinks gay marriage is a big boost to equality.

“I am overwhelmed by the fact that I can get married now. For me the main thing about marriage equality is the fact that it’s making gay people appear more normal. The next generation will hopefully see gay people as completely acceptable in society,” said Tom.

The July wedding will be 1920s themed, including a clothes change. During the day the dress code will be Downton Abbey, whilst the evening will see them changing into a Great Gatsby inspired attire.

“It’s nice to be able to do something I thought I would never be able to do. Ten years ago, if someone told me that in ten years time I would be getting married, I would say ‘no way’. I used to feel lesser than everyone else, I didn’t feel as valued by society as straight people were. Now I feel completely on par.

“It goes to say that our country is forerunners in promoting equality and fairness but the world as a whole has such a long way to go still,” said Tom.