A great movie which will warm your heart and another worthy entry in the Disney canon. 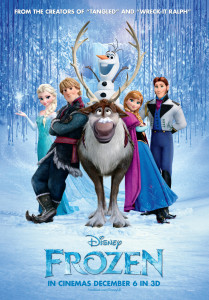 Frozen brings the winter feeling to town with beautiful animation, a well-written plot and packed with loads of sing-along songs.

Princess Elsa (Idina Menzel) has a gift of being able to create snow. As a child, she accidentally injured her sister, Princess Anna (Kirsten Bell) whilst trying to control her gift. When her power is revealed at her coronation, she flees in panic - reducing the kingdom into eternal winter. Anna must go after her and find a way to undo the spell.

Disney is well-known for their loosely adapted fairytales and after the success of Tangled (2011) came the era of Broadway hits, canine sidekicks and adjectival titles that do not mention the heroine. Frozen, adapted from The Snow Queen (by Hans Christian Andersen), is another accomplishment in the Disney canon.

The bond between the sisters is the strongest and emotional part of the film and causes a kind warmness to the heart. The relationship between Kristoff (Jonathan Groff) and his dog-like reindeer Sven carries the comedy part in large proportions. Also Olaf (Josh Gad), the cheery and innocent snowman brings more comic value to the movie.

The entertainment is consistent and the jokes are thankfully funny, but this is just the icing on the cake, as the impeccable animation captures the wonder of winter.

Disney dared to be different from the fairytale-like narrative when it comes to the iconic villain. Frozen does not have a main villain that the audience can despise throughout the film, but the plot turn succeeds the fairytale associations. This bold approach makes the film more entertaining for the whole family to enjoy.

These risky moves should be taken more by Disney to add individuality and identity to every movie they produce.

Frozen brings lots of laughs and a strong narrative that will make you excited for the beauty called winter.