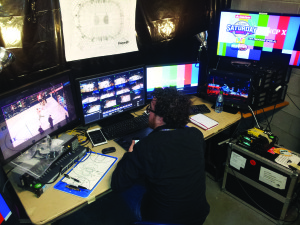 The control centre, where the replay images are created. ©REPLAY TECHNOLOGIES

Introduced for the first time to tennis at the BNP Paribas Open tournament in Indian Wells, California this month, the freeD, or Free Dimensional Video technology, shows 360-degree replays of action sequences, which are recorded by 22 high-speed ultra HD cameras. Television producers are then able to pause the motion and create still images of the action - much to the excitement of commentators who can analyse in detail strokes, rallies and movements of the players.

“It’s not about a representation of reality, but it is the reality itself,” said Diego Prilusky, the Creative Director and head of CGI at Replay Technologies Inc - the brains behind the system. This American company has previously used the system in the American football league [NFL], basketball league [NBA], as well as the PGA Golf Tour, and MLB baseball league.

“We use multiple cameras and we combine all the different information in one, three-dimensional space and you get a scanning of all the arena.

“Having that 3D scanning, you can really move the camera around, and you have the freedom to shoot all [the arena] at once,” said Prilusky.

The idea for the 3D image came when Replay’s founders Oren Yogev, Matteo Shapira, and his brother Aviv discovered that they could create a 360-degree video of instant replays, and noticed that there was a gap in a market which constantly seeks new ways to enhance the viewing experience of broadcasted events.

The freeD technology allows for a more comprehensive representation of reality and action than the conventional, 2D footage, which is constrained by the ability of a camera to shoot footage only from a single angle at a time.

The system is new to tennis, but its creators admit that they found inspiration in the famous scene from the 1999 movie The Matrix, where the main character Neo leans back, almost to ground level, to dodge the numerous oncoming bullets.

“Everyone was amazed at the ‘bullet-shot’ technology of The Matrix films,” said Eric Finney, the Executive Vice President at Replay Technologies, Inc. “The movies were an inspirational catalyst for the creation of Replay technologies and freeD technology,”

Indian Wells became the first tournament to use the technology after ATP Media approached the company’s CEO Yogen after seeing freeD in action on Sunday Night Football and the NBA’s All-Star Weekend 2014. Soon, however, the Replay Technologies’ freeD system will be used at more events.

“We have signed a contract with Roland Garros, so freeD technology will be used at the French Open 2014. We are actively pursuing deals for the remaining Grand Slams, including Wimbledon and the US Open, but nothing has been finalised yet,” said Finney.