This film takes Thanksgiving to a whole new level by taking turkeys off the menu.

Free Birds is a good at idea that turned into a disaster. 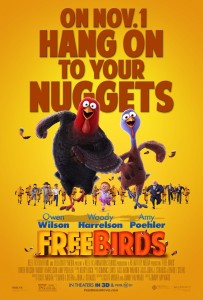 When Reggie (Owen Wilson) is given an unlikely pardon by the president, he finds himself roped into Jake’s (Woody Harrelson) time-travelling plan to save all of turkeykind.

The concept of saving turkey from Thanksgiving was good in writing, but when animated, it lost its momentum and turned into a screwed plot. There are some funny lines, but annoyingly they are featured in the trailer, so the film loses all of its unpredictability and funniness.

The only thing good about this film is that it appeals to vegetarian parents who want to show kindness to animals and entertain their little ones. The kids will find it amusing and the characters likeable, but they may still find it boring, as it has no clear villain for them to sink their teeth into.

The film can be seen as offensive to some people, with 17th century turkeys as the film featured face-painted, headband wearing Native Americans. Also the changing the historical nature of Thanksgiving holiday is never a good idea.

Despite Free Birds having good intentions by creating a family entertainment film with skilful animation and a talented vocal cast, it just all seems wasted.

It seems that Hollywood is sending a message that pizza for Thanksgiving is the way forward. Free Birds is entertaining for the kids, but not worth the time.

How did you find Free Birds? Let us know in the comments!