Jon, Baz and Mince are best known as indie blues rock band The Fratellis, who came to the Bournemouth o2 Academy on the 17th November with their ‘We Need Medicine’ tour.

Electric vocals, hilarious northern quips and brilliant guitar solos were all on the agenda for their amazing album tour. The band, who have been around since 2005, split up in 2009 only to re-unite this year in show stopping style with their new album. 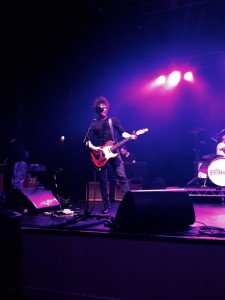 The band were supported by Cut Ribbons, a young 5-piece indie band from Wales who really set the tone for a brilliant night. Beautiful vocalist Anna Griffiths stole the show with her gorgeously soft yet edgy vocals.

Opening with ‘This Old Ghost Town’, an upbeat track sure to get the crowd excited and then playing some old time hits from ‘Costello Music’ to kick the show off, it was clear to see this was going to be a great night.

By alternating songs from ‘We Need Medicine’ with old classics in order to keep the crowd going, it soon became apparent that many people didn’t know the new album as well as others. Strange, I thought, as this was their new album tour and you would expect people to have heard the new album!

Surprisingly, they only played two songs from their second album ‘Here We Stand’, an album which I really enjoy. Although it has been mentioned that this is their least favourite, due it being a contractual obligation album, compared to the other two.

Jon Fratelli had a certain lack of crowd interaction sadly, but this didn’t matter overall, as so many of the songs were really recognisable and all crowd pleasers which really got the atmosphere pumping. The Fratellis knew what the crowd needed and steered away from slow ballads and more downbeat songs, and instead played lots of well known hits which ran into one another beautifully.

The crowd was pretty static until ‘Chelsea Dagger’ where the atmosphere exploded - mosh pits started and the place went wild! It was clear that this was the song that everyone had paid to hear; the anthem of 2006.

A couple of major songs were missed off the setlist for me - ‘Creepin’ Up The Backstairs’ and ‘Mistress Mabel’ being their biggest hits of the ones missed, yet I do think their setlist was pretty perfect apart from these two one which were missed.

One criticism has to be the prices for the drinks at the o2 Academy, as it was around £4 for a pint of beer, which seems a bit too high for student prices, yet the elegant appearance of the venue made up for this.

My personal highlight of the night was when we waited outside the back of the venue afterwards and met the band. Mince and Baz were really friendly but sadly Jon was ill so we didn’t get to talk to him. Baz kindly took the vinyl we had bought into the tour bus to be signed by Jon so we had the set of signatures, which was really genuine of him. I was really taken by how friendly they were and how down to earth too.

A wonderful night overall, with amazing songs, amazing support band and such friendly guys. The album ‘We Need Medicine’ is a must listen too, I’d definitely see them again.

Deputy online editor. BA Multimedia Journalism 1st year. I love writing, karate, photography and music, throwing my enthusiasm into everything I do. In the words of Ron Burgundy: "You stay classy, Planet Earth"