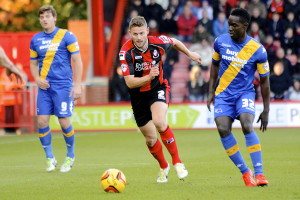 Ritchie missed the start of this term after picking up an injury during pre-season, leaving manager Eddie Howe without his star man.

The midfielder was named League One Player of the Year last season and it is thought he could have an equally devastating effect on Championship defenders this time around.

A run of one win in ten games prior to the away game at QPR on Tuesday has pushed Howe’s men towards the relegation places as opposed to the play-off positions, but Francis believes Ritchie’s return can reverse the side’s recent results.

“Having Ritchie back is like a new signing because he brings a real buzz to the team when he is on the pitch,” said the right-back.

“He is looking sharp and was really good when he came on against Derby. If we can keep players like that fit, it will go a long way for us to win games.

“He is an important player and I think we saw that last season. He had a key hand in getting a lot of goals and he gets assists with his deliveries so he will be vital.”

Francis struck up a strong partnership with the former Swindon Town man on the right-flank after his arrival at the Cherries in January. Francis is adamant that a combination, which has allowed himself to get forward as well as winger Ritchie, will cause havoc in the Championship this campaign.

“We have been working in the last couple of weeks about getting balls in the box and we do not want to go away from that,” he said of training methods. “Playing with him as a wide player encourages me to overlap – it is a partnership I enjoy.”

The Cherries recent slump shows no sign of easing anytime soon with a tough away trip at Reading next on the menu, although Francis is confident that they can still look towards making more of an impact in the division than just ensuring safety in the second-tier.

“We want to look up rather than below us but when you lose games, you cannot help but look at those teams creeping up on you.

“Eddie is a terrific manager and he knows how to bring confidence to this squad. He has done it before.”