Dorset Fire and Rescue Service has urged students and elderly residents to stay alert after eight fires were caused by unattended cooking in two weeks. 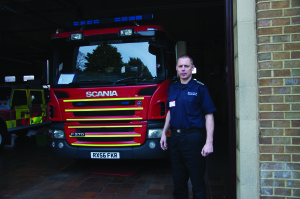 District Commander Stuart Jeneson said these fires are mainly caused by elderly people who may fall asleep or who may be inattentive to their cooking, as well as students who decide to cook after a night out on the town.

He said it is important to realise how dangerous the mere smoke from these fires can be.

“If you’ve been out on the town and just fancy a sausage sandwich, the grill pan you decide to use may not have been washed since last time and can be dirty with fat. The heat turns the fat to liquid then gas, which then can ignite fire.

“It is actually quite nasty. Some of the gas produced from a normal chip pan is absolutely deadly,” said Mr Jeneson.

“There is a misapprehension amongst most people when it comes to fires, as they assume it is experienced in a way they have seen on TV. Real fires in starting stages involve vast amounts of thick smoke, and very little fire. Firefighting troops are trained in doing house searches blindfolded because often the smoke is too thick to see through.

“It is not normal to burn to death, but the smoke will kill. After a while you will start breathing in smoke without noticing it, and without a smoke detector you will not be able to hear it happening as the fire does not make much sound.

“The smoke will start to poison you and act as a narcotic by putting you to sleep. It will also stimulate your breathing because you are not getting enough oxygen, so you breathe more. That’s why you are rendered unconscious very quickly, and can do nothing about the situation,” he said.

Mr Jeneson added that it is possible to wake up despite the narcotic effect of the smoke, but arms and legs may not work as they should do, so it will be difficult to do anything about the situation.

“When we turn up to fatal fires we often find casualties that look like they are all right, but they are covered in soot and you can see that they have breathed in smoke,” said Mr Jeneson.

His advice is to keep fire doors closed so that smoke is kept within a confined space, and to use common sense when cooking after a night out on the town.

“Most people keep fire doors open, but the moment the smoke gets out in corridors, it cuts off escape routes.

“We are not saying not to go out and have a good time, but it is that little bit of thought at the end of the day that is needed.

“Get a take-away or ask someone to cook for you. If you decide to cook yourself, you need to be sensible and understand what you are doing,” said Mr Jeneson.

He added that although some students think a small fire is a bit of a joke, it is important to stay alert.