Macabre racism allegory Strange Fruit enchanted the audience with its sucker punch of an ending when it was screened at the BUtiful Film Festival. 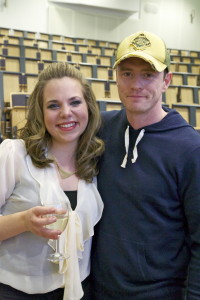 The animation was presented with both the BUtiful Award and the Butterfly Award by festival organiser Giulia Rodilossi at the end of the glittering awards evening a few nights later, attended by film fans and industry professionals.

As well as the main organising team of the festival, the awards night was attended by Vendetta director Stephen Reynolds, and Dan Pringle, from Bournemouth-based production company White Lantern Films.

Reynolds gave a short speech about the road that led him to making his revenge thriller and answered audience questions about working with Danny Dyer and his genre influences.

Festival organiser Giulia Rodilossi was very pleased to get a notable professional on board with the event.

“Having the possibility to have someone as talented as Stephen Reynolds to come, attend and answer the audience’s questions, was particularly important for us.

“The ability to create a dialogue between all of these players involved inside and outside the festival is the first step to creating a connection which we hope will grow and last for the upcoming years.”

Reynolds also presented the award for Best Director and Best Cinematography to Spanish drama Mi Ojo Derecho, which deals elegantly with themes of love and loss.

The film, which is titled The Apple of My Eye in English, uses a number of dramatic and visually striking motifs to illuminate the heart-breaking tale of an elderly woman slipping away from her beloved grandson.

Other awards went to shorts from the UK, Ukraine and even as far afield as Argentina.

Giulia was keen to praise the variety of films on offer at the festival in its second year.

“One of our biggest wishes for this festival is to be able to sustain artistic multiculturalism worldwide.

“Diversity is at the core of this project, starting from the organisers themselves that bring out different outlooks and perspectives. This is especially impressive considering their different cultural backgrounds.”

She adds that the festival must continue to grow if it is to become a staple part of the Bournemouth University calendar.

“The festival was founded and developed with the idea that it would last a long time and that it would be carried out in the upcoming years.

“We hope that the BUtiful Film Festival will become a point of reference for filmmakers and students alike, and that BU, with their history of support for the arts and for youth creativity, will appreciate its continuous growth.”