A comedy mob film that sees a family who know how to cheat the system, get their way and still have cheesy family moments 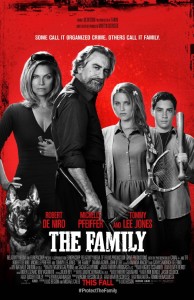 The Family follows a kickass family who know how to cheat death while running away from their past. A former mob man, Fred, (Robert De Niro) and his family Maggie (Michelle Pfeiffer), Belle (Dianna Agron) and Warren (John D’Leo), are placed in a witness protection program that relocates them to France so they can start a new life. The trouble is that this family cannot stop using old methods to solve problems and their past life keeps catching up with them.

It is evident that this film is a comedy with upbeat music, clique moments and an array of witty set ups and punch lines. But the cheesiness of it all leaves the film flat, with the familiar after taste of an overly done set up.

The impeccable cast try to retain the funniness with their outrageous and psychotic characters, but sometimes that is not enough to make a comedy a success. Yes, it is smarter and sharper than other comedies, but the script is like a roller coaster rids of outrageous laughs and awkward, almost painful, silences.

De Niro always suits characters that are included in the Mafia or mob gangs, so nothing new there. But the ladies, Pfeiffer and Argon, prove that women can be kickass too. Tommy Lee Jones also features in the movie as the FBI agent, helping the family in witness protection programme. But it does feel like the casting is lacking in imagination, by basing it on the typecast on the actors. Doesn’t Tommy Lee Jones’ FBI agent feel a bit like Men in Black to you? Luc Besson does know his way around an action film, but not feel as skilful for a comedy.

The Family is an entertaining film, even if it is somewhat corny and poorly put together. It is nice to see a family that stay together and fight together, with a few jokes here and there.