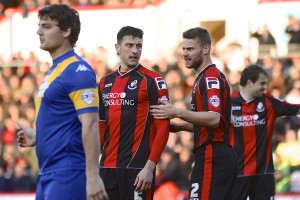 Cherries captain Tommy Elphick believes that the club need to get their home form back on track if they are to be successful this season.

The Cherries surrendered their one-goal lead in the last match at home to Brighton to secure a first home draw of the season while their last home win came two months ago to this day, beating Millwall 5-2.

The 26-year-old feels that an improvement in form at Dean Court will not only boost the morale of the squad, but give the fans a much-needed lift as well.

“Home form is everything,” said Elphick. “If you want to be a successful side you have got to be good at home and obviously that’s something we need to put right as we have not won in a while, so it would give not only ourselves a boost, but the fans as well.

“I think we have to put more pressure on ourselves if anything at the moment. We seem to be playing better away from home and I don’t know whether that’s a sort of ‘monkey off the back’ situation.”

Elphick insists that the Cherries need to sort their form out as a matter of urgency and is hopeful the team can grind out a few wins over the coming matches.

“One way or another we have got to start winning whether that be at home or away and I think when that happens we can go on a little run again,” he added.

Centre-back Elphick has found himself ousted from the starting line-up regularly this season, with Norwich loanee Elliott Ward taking his spot in the heart of defence.

Elphick and his defensive partner Steve Cook played at Brighton together before both making the move to the Goldsands. Such a partnership has blossomed into the starting line-up again following a calf injury to Ward.

“Its been a little bit frustrating but now I have got the opportunity to get some rhythm and get my fitness back,” said Elphick.

“Every successful team has three centre-halves, if you look at Man United, Chelsea, Arsenal and Tottenham, you will always struggle to name their front two centre-halves. “You would have to think about it a little bit, so with the games that we have got this year we are all going to play a massive part.”

Key injuries to the Cherries backline have forced manager Eddie Howe to call in goalkeeping reinforcements in the shape of Stephen Henderson and Lee Camp. Elphick believes the loanees have slotted in well but says it is naturally difficult to deal with.

“It is always good to get to know who you are playing with,” he said.  “You get to know their characteristics and sort of build a foundation. It has been unfortunate to lose Ryan Allsop when we have, and Daryll Flahavan as well so I think it’s something that has been forced upon us.”

The Cherries enter the busy Christmas period looking to resurrect their form, and iron out the inconsistencies that have plagued Eddie Howe’s men so far this season.  Looking ahead to the remainder of the season, Elphick is adamant that the Cherries have the ability to maintain their Championship status.

“We are an improving squad, a young squad and we have proven we can do it at this level so far.

“We have still got a big gap between us and the bottom and we’re not far off the play-offs,” he added.