The hotly anticipated PPV Elimination Chamber 2014 finally arrived this Sunday with a highly anticipated line up of matches. Did the chamber deliver on it’s promise of all out carnage or should the event itself have been eliminated? This article contains spoilers.

Well, I can at least say I was left more satisfied by Elimination Chamber 2014 than by the Royal Rumble last month. The Chamber had some fantastic matches and some highly anticipated confrontations, but was unfortunately marred by predictability. Here’s a match-by-match run down of the PPV. 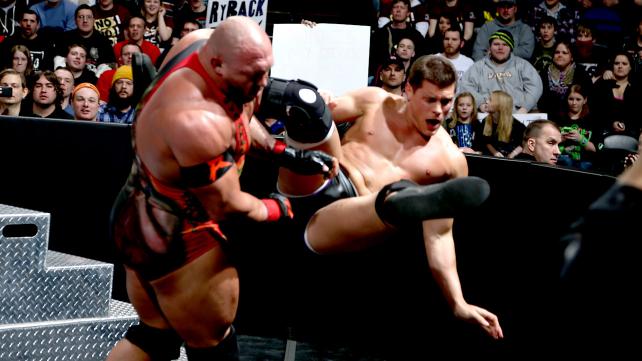 A rather flat start to proceedings, which was to be expected. The match wasn’t given long enough to let the performers do much and Ryback continues to be a mediocre in-ring talent. It’s a real shame to see the Rhodes Brothers without the belts and relegated to a sub-par pre show display.

Curtis Axel did put on an impressive showing, however, with the short time he had. I think Axel is brilliant in the ring, despite lacking skills on the microphone and I would like to see him utilised more. Also, how great was it to see Larry “The Axe” Hennig again? 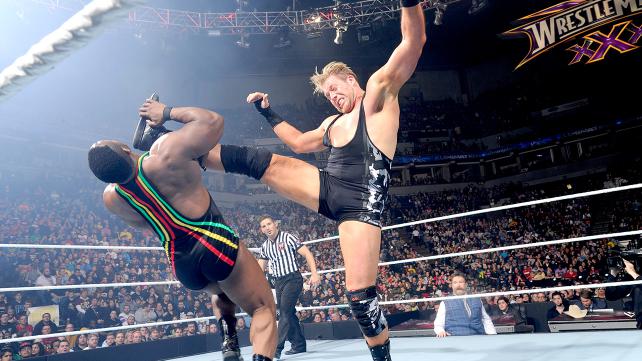 This was probably the biggest surprise of the night.

Despite how much I like Big E, since he became face he’s suffered from a very dry big guy offence – a lot of running into people and bulldozing that feels stale. His match with Swagger at Elimination Chamber 2014 however was fantastic.

The spots weren’t perfect, but they remained thoroughly entertaining and these guys really brought their A game. The match unfortunately suffered from little drama by virtue of a lack of build-up. It remained a top notch match despite its problems, selling both superstars as real powerhouses. As expected, Big E retained the Intercontinental Title, continuing his push for the top. 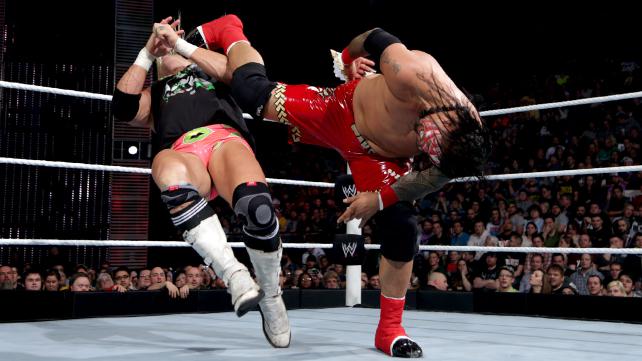 The Usos are one of the most talented tag teams in the WWE and always put on a good show, especially when paired with teams that can match their talent.

Unfortunately, The New Age Outlaws were not able to put up enough of a match. I understand the appeal of nostalgia, but these guys are really past their prime. It undercuts the talent of the Usos when they don’t have room to show off what they can do. The match was short and the Outlaws did not deliver.

I’m hoping the Usos can become champions at Wrestlemania and show the WWE Universe that they are one of the most talented teams in recent memory. Let’s have more matches like the pre show with The Shield at Money in the Bank rather than the drab match-up we saw at Elimination Chamber 2014. 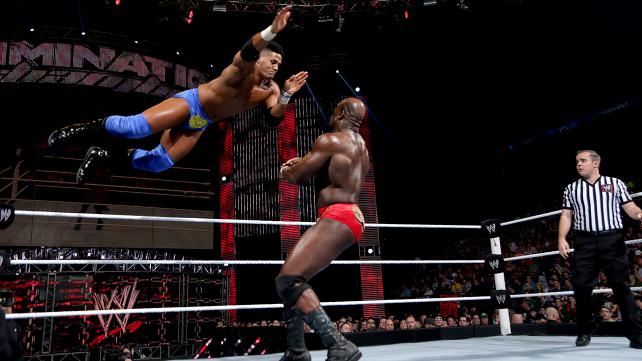 This seemed like an afterthought for the match card, but I was hoping that it could be used to really put one of these guys over. It seemed the intention was for it to be Titus, with him dominating the match and picking up the win, but the match failed to excite.

Titus has shown himself to be a dominating force in the ring, but the lack of drama and short running time left nowhere near enough room to show off what these guys could do. I really hope to see more of these two after Wrestlemania.

The Wyatt Family vs The Shield 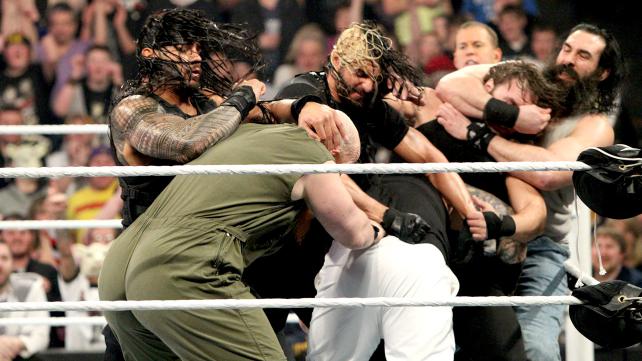 This was the best match of Elimination Chamber 2014. It surpassed even the Chamber match itself in the amount of carnage it produced.

The two formidable forces of The Shield and The Wyatts have been kept apart for a long time, which allowed tensions to build and a great rivalry to culminate. The anticipation coming into this match was so intense that the crowd began chanting “this is awesome” before the match had even begun.

Every single wrestler had a chance to show off. Luke Harper leapt from the ring to the outside, Seth Rollins had an amazing presence with a series of high flying moves and, of course, Roman Reigns and Bray Wyatt excelled as they always do.

The match had shades of the Attitude Era: two imposing force and fan favourites in a long overdue confrontation. This is what the WWE needs to focus on as the fans have been craving this and were foaming at the mouth to see these guys fight.

The two teams gave us an all-out war of a fight that allowed everyone to get over as well as effectively showing Bray Wyatt as a genuine threat when he comes to face John Cena at Wrestlemania. This is match of the year quality. If you don’t watch the PPV, at least check out this match. 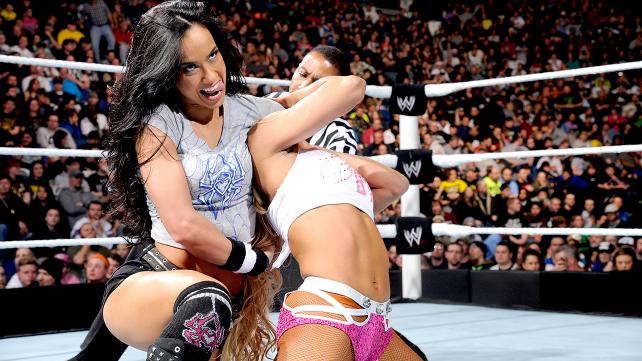 I think everyone forgot this was even on the card for Elimination Chamber 2014. The match that was being set up was meant to be Naomi vs AJ but Naomi suffered an injury that has left her out for a while.

So, in her place was the other member of the Funkadactyls, Cameron. Unfortunately, she is not a great performer. Naomi is one of the most underrated Divas in the company and has shown some genuine talent compared to most of the other Total Diva cast members.

It’s a real shame that Cameron had to fill her shoes because she is very poor and the match reflected this. It was very short and they ended it with Tamina causing an accidental disqualification for AJ.

Another very bland offering from the Diva’s division.

At this point, they really should give up and rename him Boo-tista. The crowd don’t so much dislike Batista as they don’t want him to even physically be in their presence. This isn’t heel heat; this is pure hatred.

He’s become the symbol of everything that’s wrong with the WWE’s attitude towards the fans and they really brought out the hate at Elimination Chamber 2014. This, along with the fact that the match was incredibly boring and its finish predictable, rendered it another pathetic display. Batista had barely any offence and spent the majority of the match catching his breath. If this is what we are to expect at Wrestlemania, it’s going to be catastrophic. 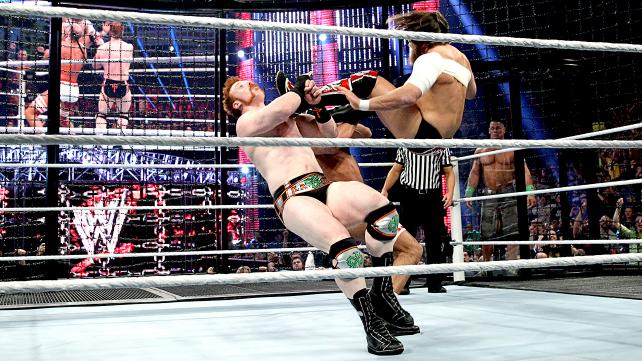 The Chamber was a good match, had some great spots and was generally edge of your seat entertainment with a lot of drama. It was a shame about the ending, but I’ll get to that.

The real stand-out, as expected, was Cesaro. It looks like his push his finally getting the time it deserved and the crowd were thoroughly behind him. He had an amazing german suplex spot with Daniel Bryan and a 30 rotation giant swing that the crowd loved.

Christian continued his ruthless streak, heavily targeting Bryan’s injured shoulder, and really sold his heel turn. One of the biggest surprises was the Wyatt Family managing to get into the Chamber and attacking John Cena, helping to cement their match for Wrestlemania.

Now, the ending. I think we all knew that as soon as Kane showed up, Daniel Bryan was going to lose. More annoying though was that the build-up gave us so much hope. With Bad News Barret specifically berating him earlier and after a kick out from the RKO, it looked all set for the WWE to turn over its decision to have a predictable bland finish that would lead into a really loathsome Wrestlemania main event.

Randy Orton, of course, claimed the victory and I think this tweet from WWE legend Mick Foley sums things up perfectly.

They say a picture’s worth 1,000 words. Here’s my 5,000 word essay on #WWEChamber pic.twitter.com/FnmTt5wtEw

The disappointing result set up a really sad finish to proceedings at Elimination Chamber 2014 that left the fans in attendance with what was described as a “funeral vibe”. There were no cheers for Orton, just silence, and that in itself said more than any boos possibly could have.

Elimination Chamber 2014 was full of intense matches. The Wyatts v Shield was match of the year quality, but unfortunately much of the PPV was simply too predictable. Every outcome could be seen coming from a mile away and the sour ending has left the Wrestlemania card looking abysmal.

I’d recommend watching the event for the few great matches, but the show was as predictable as the Spanish announce table being destroyed.

Please leave your comments below. I’d love to hear them.