E of E An amazing support band for an incredible supergroup

There are few words that describe the boys of E of E better than charming, hilarious and incredibly talented. 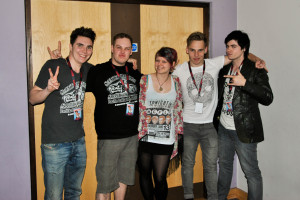 Me and E of E © Quirkycurls

Luke, Nicky, Dan and Tom, aged between 18 and 25, formed E of E last year and have shot to fame since; after receiving the call that they would be supporting McBusted in arguably the biggest music event of 2014.

I went behind the scenes before McBusted’s show at the BIC on the 22nd April, to meet the boys.

Having previously tweeted asking what their favourite tour snack was (McDonalds), I bought 40 chicken nuggets and headed up to the BIC, in the pouring rain. Arriving there, I saw queues of people stretching across the car park, and the main reception was teaming with people trying to buy their merchandise before the show and hoping to catch sight of McBusted.

Tour manager Darren took me round to meet the boys, and I was greeted with a smile and we sat down for a chat.

“You’re our favourite interviewer so far!” - It appeared my present of chicken nuggets was a good idea.

The boys were an absolute pleasure to talk to. They seemed genuinely friendly and enthusiastic about the tour.

I asked about what they thought of Bournemouth.

“Yeah, when it was sunny it was ace! Then it rained and it was a bit meh. We went on the beach yesterday (21st April) and there was all sorts happening down there, people doing gymnastics and people playing football. I was disappointed with the Subway [on Lansdowne], because they usually have sweetcorn and they didn’t have any, it was the low point of the tour.”

Thankfully it seems the sweetcorn incident hadn’t put them off our sunny seaside town.

“Bournemouth’s different to the others, because the others have an OMFG zone. It’s really good here because you can see all of the crowd as usually you can see the people in the OMFG zone and no one else because it’s so dark, but here you can see everyone. It’s ace. It feels more like an academy gig this one, I love playing these kind of venues. When we played the Hydro, that was the biggest thing we’ve ever done. The MEN will be big too, when we found out Sabbath had played there we had to think “God we’ll be on the same stage as them”.

With infectious smiles and laughter, it seems the boys are proving a hit with fans.

“The reaction on twitter is great. We’ve been recognised out clubbing in Glasgow! Year 3000 came on in the club and they’re all pointing at us! We definitely try to make a conscious effort to meet people because you put yourself in their shoes, you see a band and try to meet them, it’s just nice to come and say hello.”

Plans for next year?

“Maybe we’ll get our own tour if this goes well, that’s the dream. Even our own arena tour, you never know! We’re aiming high. We’ll do some more writing as well, get some more recordings. We’ve got ideas but no set plans, we’ll just see how it goes.”

I was blown over by the boys and how down to earth they were. I can safely say I’m a fan.

The show itself was phenomenal.

First up was Young Brando, who gave the performance their all and had some catchy songs which really got the crowd moving.

Next was E of E who blew me and my friend Ashleigh away. They started off with an amazing mashup and then played a few of their own songs - the amazing “Kiss Me Like You Mean it”, “Piece of You” and their new single “Lust”.

The whole crowd went wild and they really surprised me, I thought they’d be good, but was surprised I found myself singing along and getting excited like I was 12 again! After a short interval, The 3 Dudes came on. I have to say I was underwhelmed, I found their musical talent really something quite special, but their lyrics weren’t right and they were slightly cocky; “Bournemouth girls are so hot” felt a bit inappropriate coming from a band as young as them.

Next was McBusted. There are few words that can describe them.

Only screams and hyperventilation as your childhood comes rushing back to you at a million miles an hour.

I can safely say I have never been to see a band who performs with such passion and energy as they did. I won’t disclose the set list or stage show, but trust me, you won’t be dissapointed. A faultless performance, with hilarious crowd interaction and boundless energy.

A few days later and I find myself considering buying tickets for their return to Bournemouth. Never before have I been brought to tears during a concert, laughed my head off and then found myself singing all the words to songs I had forgotten I even knew. A spectacular reunion.

Listen to E of E here. Tickets are still available for the McBusted tour as they return to Bournemouth on the 28th and 29th May.