Steven Moffat was pulling out all the stops on last Saturday’s Doctor Who 50th Anniversary Special; with Tom Baker and Peter Capaldi’s eyes thrown in for good measure.

Having attended the 50th Anniversary convention the day before The Day Of The Doctor at the London ExCel, it was easy to say I was excited for the special. After attending talks with Steven Moffat himself, Matt Smith (11th Doctor) and Jenna Coleman (Clara Oswin Oswald), it was clear to see that there would be no secrets given away today; lips were firmly sealed. Questions about working with Billie Piper (Rose Tyler) were masterfully avoided, leading the audience to think there was more to her than had been said. 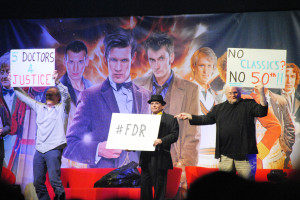 Some old favourites such as Bernard Cribbins (Wilfred Mott), were just as funny and sweet as expected, with funny anecdotes thrown in. Some cast members went for the non- serious approach, such as Sylvester McCoy (7th Doctor), who was just as mad and hilarious as I’d hoped! Jenna Coleman was gorgeous as usual, with a Peter Pan collar red dress pulled off elegantly and Matt Smith rocking the jumper and leather jacket look, although his trademark hair had been chopped for his recent filming.

Cosplayers really stole the show for me, with elaborate costumes left, right and centre. Many people had come wearing a fez or wearing a Cyber-man mask, but some had really pushed the boat out. My personal favourite being a woman who’d made her mobility scooter into a Dalek by building one around it- Genius!

Sadly, I was disappointed to see that some of the special guests at the convention were sharing autograph times with the classic Doctors, and therefore were looking woefully lonely. This is always sad to see, as these were companions from the earlier series who were losing out to the ‘stars of the show’, however it was lovely to see that the fans they did attract were often the real fan-girls and boys who know everything about the show and more and often just wanted a chat more than the actual signature on their mug or photo.

The event was quite well organised, with the venue being absolutely perfect to accommodate the size of the attendees, although the food prices were astronomical (pun intended). Most of the talks started on time and went smoothly with minor technical hitches, queueing times were kept vaguely low and merchandise wasn’t stupidly overpriced.

Overall- a wonderful day out with a hilarious protest by the Classic Doctors at the end of the ‘Regenerations’ talk, some brilliant company and far too much brilliant merchandise to be able to afford all at once!

Having arrived home, bag overflowing with things I’d bought, cuddly toy Adipose included, I enjoyed a restless night’s sleep in wait for the next day. 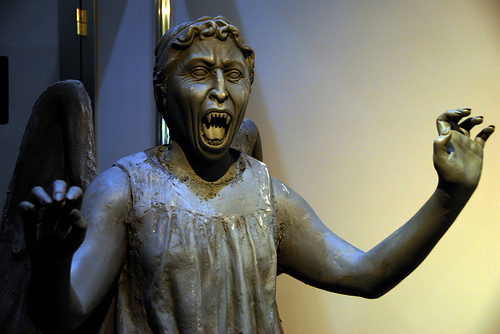 The 50th Anniversary Special arrived and was absolutely glorious. So much better than I’d expected. Peter Capaldi’s brief appearance gave me chills as I realised just how perfect he was for the part- not the Malcolm Tucker figure I was used to, but a determined Doctor with the best eyebrows this side of Gallifrey.

After enjoying my fish fingers and custard, I reached out to Tumblr to gauge the reaction there, and realised so many things about the special that I had not realised, such as Tom Baker giving his scarf to Osgood, after his appearance basically breaking the fandom! As well as that, the greatest credits ever seemed to win many people over too! More Easter-eggs can be found here.

I have to say though, one of my favourite things about the 50th Anniversary celebrations has to be the companion piece to the special- The Five-ish Doctors, in which many companions, Doctors and production staff star, including my personal favourite- John Barrowman (Jack Harkness). The Five-ish Doctors was amazingly clever, with a brilliant plot and undeniable comedy, also starring Paul McGann (8th Doctor), who should have got his own series in my opinion!

Verdict of the 50th: Unbeatable.

Deputy online editor. BA Multimedia Journalism 1st year. I love writing, karate, photography and music, throwing my enthusiasm into everything I do. In the words of Ron Burgundy: "You stay classy, Planet Earth"