Being compared to The Hunger Games (2012) is not doing it any favours. It deserves to stand out in its own right. 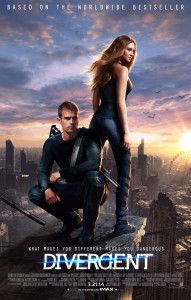 Divergent keeps you hooked from beginning till the end and this has to be the best teen dystopian story on screen ALONG with The Hunger Games (2012).

In a society divided by factions based on human virtues, Tris (Shailene Woodley) learns she’s divergent and won’t fit into any group. When she discovers a conspiracy by a faction leader (Kate Winslet) is to extinguish anyone destroying the peace, Tris must learn to trust in the mysterious Four (Theo James) and together they must find out what makes being Divergent so dangerous.

Guide to the factions:

Shailene Woodley convincingly portrays a heroine battling in a city where being controlled causes chaos and tragedy. Theo James pulls off the bad boy with a sensitive soul persona exceptionally well and can certainly get the pulses racing.

Together Shailene Woodley and Theo James add personality and physicality to the stylish, tense and surprisingly pace. Yes, there are flaws and some logical blunders but this is due to converting a 487 paged novel into a 2 hour film.

Divergent keeps getting compared to The Hunger Games and that is not doing it any favours. This film deserves to stand out in its own right. This thrilling sci-fi adventure is every bit as good as The Hunger Games with a dash of The Matrix (1999) added for good measure.