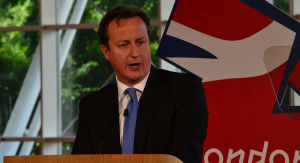 The film won seven Academy Awards in the ceremony on Sunday night.

Tobias Ellwood, MP for Bournemouth East, drew attention to the work carried out by more than 50 graduates from the two universities on the film during today’s session in the House of Commons.

He said: “In recognising British success at the Oscars, would the Prime Minister join me in congratulating Bournemouth University and the Arts University Bournemouth, as over 50 of their graduates helped with the design effects for that amazing British film, Gravity?

“Does that not prove that Bournemouth leads the way in digital media, is a great tourism destination, and does amazing party conferences as well?”

Mr Cameron responded by saying that the Bournemouth politician was “right about all of those things”.

“Bournemouth University has excellent courses that have helped to build up the British post-production and facilities industries, which are busy helping to create blockbuster films,” he said.

“It is very good news not only that are we winning Oscars for British films but that British studios are full to bursting point making movies.”

Students from BU also worked on Frozen, which won Best Animated Feature, and The Hobbit: Desolation of Smaug, which was nominated in several technical categories.

Their work will be showcased this year in such films as Marvel’s blockbuster Guardians of the Galaxy and the Tom Cruise actioner Edge of Tomorrow.