Dallas Buyers Club is an astonishing true story and portrays some fine and serious acting from some talented actors. 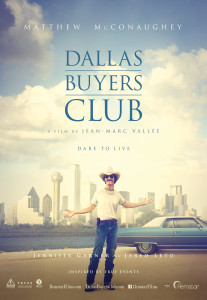 Ron Woodroof (Matthew McConaughey) is a straight but promiscuous lowlife who discovers he is HIV positive in 1985 Texas. Refusing to accept the worst, he turns to blackmarket medicine and becomes the unlikeliest saviour.

This is one of a few films where the actors change their own physical appearance to play a role. There are a selection of films that represent this, like, Robert DeNiro in Raging Bull (1980) and Christian Bale in The Machinist (2004).  These changes make the story and become more real. Matthew McConaughey and Jared Leto each lost approximately 40 pounds to play their respective roles.

Ron Woodroof a homophobic, drunk, drug addict and promiscuous redneck and Rayon (Jared Leto) a senstivie, street-savvy, drug addict transsexual have an unlikely friendship and the emotion between the two is well-received and well-executed.

Both these actors have been praised for their efforts in Dallas Buyers Club, with Oscar nominations and the winners of two Golden Globes. As this film is dependent on the skills of its actors’ physical and mental performance.

It is a morally, gritty and heavy-hitting drama that will have a lasting effect on its audience. It brings HIV and homosexuality in the 1980s into the light and contains all the elements of a great movie; cinematography, a good script, amazing actors, etc.

This films deals with many themes from homosexuality to AIDs. We also see the government regulations and capitalism within the film that causes the fight between living and dying.

Dallas Buyers Club is a brilliant movie that has an Oscar aura about it. With actors like Matthew McConaughey and Jared Leto, it’s worth all the praise.