The Counsellor: A rare breed in modern day Hollywood with a bold message about choices and consequences 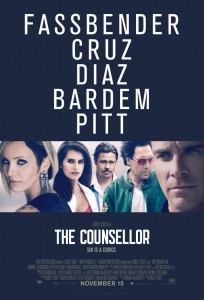 The Counsellor is bolder than other mainstream movies and is a thriller on a level that directors rarely make.

The counsellor (Michael Fassbender) is deeply in love with naive girl Laura (Penelope Cruz) and yet spends most of his live representing the dangerous drug business and their dealers like Reiner (Javier Bardem) and Westray (Brad Pitt). The counsellor is tempted by a one-off deal that could set him and his fiancé up for life, but will his decision be the wrong one.

Choice and consequence is the message of the film and even though the plot is slightly non-existent, the screenplay is what makes this movie a rare breed. Although there is some bizarre scenes, there are some well-written lines and it gives the film depth. One remarkable and fleeting character, Jefe (Ruben Blades), has the most poignant lines, for example “This world that you’ve created will cease to exist”.

The casting for this movie, particularly the lead (Fassbender), is well-suited to the marvellous dialogue and delves into the acting abilities of the cast. Michael Fassbender is seen as a dark character, like in Shame (2011) but he can definitely play the grubby type in a magnificent way.

Cameron Diaz is a twisted character who lacks moral empathy, but this feels like a miscast. Javier Bardem’s charismatic entrepreneur attitude brings a little fun and laughter, especially when describing his lover’s privates as a catfish. Brad Pitt, the womanising middleman and his brief presences in the film is a delight.

The only thing that does not leave you in awe is the ending, as it is open-ended and makes it feel unfinished. But maybe this is a new step into filming, leaving the ending up to the audience’s imagination.

The Counsellor is bold and a thriller for the audience. It creates a rare watching experience when compared to all the other mainstream American movies.