The possible explanations for the disappearance of Malaysia Airlines flight MH370 as given to us by CNN are interesting to say the least: hijacking, engine failure, black holes and aliens – just what any reasonably-minded person would consider.

CNN is rightly being ridiculed for this. It was for ratings of course, which is not news. Nor is the fact that conspiracy theories or theorists exist. What is worrying however is the exposure these theories are being given. 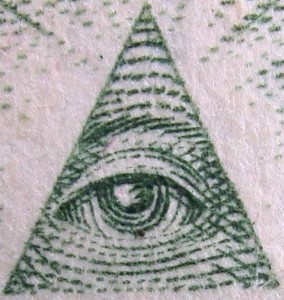 Really, no one is watching you ©ILLUMINATI

Even if it is just for ratings, publishing and giving time to insane and often dangerous theories is reckless and irresponsible. From what I can see, these people, the conspiratards, have been getting louder and louder since 9/11. Cable and satellite news, the internet and social media have been the digital petri dishes that have given an oversized megaphone to the most insane fringe of the population.

So long as they are just talking, just making noise, what harm are they doing? They are putting us all at risk by being the loudest voice in the room and skewing the public perception of some very important and complicated issues. Like water fluoridation. It’s not a mind control tool and it’s not for population culling. It’s for the prevention of tooth decay. But this doesn’t stop the loud and largely misinformed fear-mongering anti-fluoride groups publishing blatant lies in opposition.
Then there is the more important issue of infant vaccination. Vaccines have lowered infant mortality rates in a way that few other medical or scientific breakthroughs have.

These innovations have resulted in the near eradication of diseases that once ravaged our species.

One struck-off doctor, an unscientific study and Jenny McCarthy combined to produce the anti-vac movement. Claims that vaccines cause autism, that it’s a plot to control our minds and kill our children have resulted in the resurgence of measles in New York. It was considered eradicated by the year 2000 Great work, consipratards.

These are some dangerous conspiracy theories, but at least you can say that they are born of concern. Not so much in the case of the Sandy Hook and Aurora shootings. There are some who don’t think that these events happened.

The conspiratards demand that those crying victims you saw on TV and the dead kids were all actors complicit in an insidious plot to take away America’s guns. There have been phone calls, online campaigns of hate and threats on the lives of people who have already lost so much, all in the name of paranoia.

Some conspiratards believe that Jews control the world. Others think that a shadowy group known as the Illuminati or the NWO is in the driver’s seat. Some think reptilian aliens in disguise are running the governments of the planet. And there are those that would tick the box “all of the above” when it comes to our secret rulers.

Why do these ‘conspiratards’ believe what they do? Why do they harbour these nonsensical ideas? It gives them hope that the world is about them, that there is someone in control and there is a plan, even if it’s evil.

There is no one in control, no all-seeing eye and no reptilian plot. There is just a rudderless world adrift in the chaos of geopolitics and natural disasters, and no amount of angry posts on Facebook, YouTube or Reddit will change that.