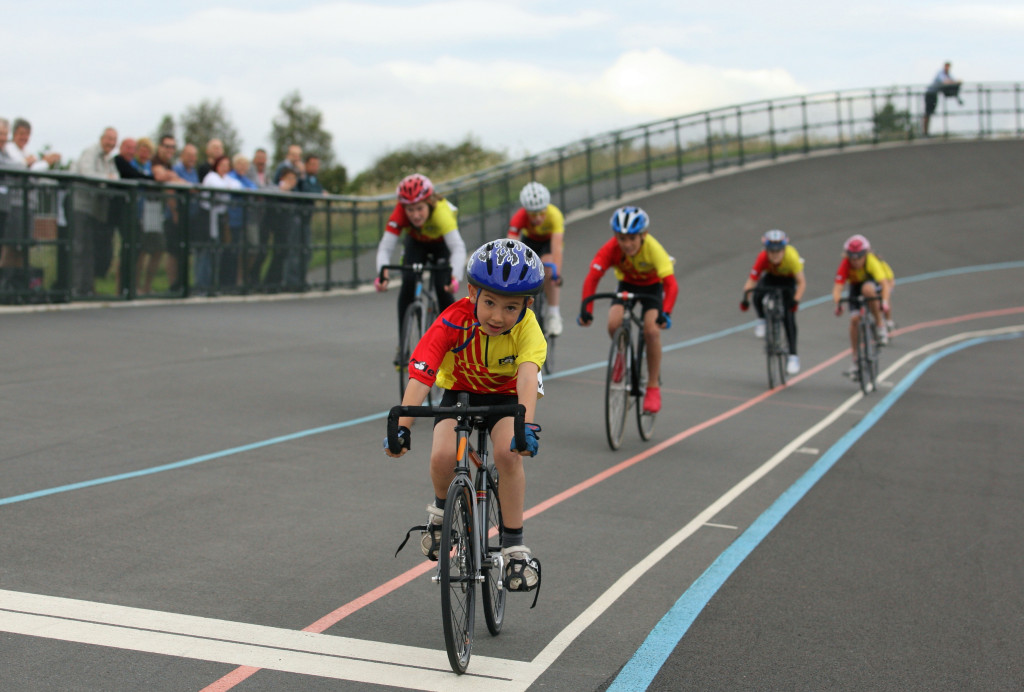 A rapidly growing cycling centre is encouraging the whole community to get on their bikes and experience the drama of track cycling, reliving the success of London 2012’s heroes.

A world championship rainbow jersey adorns a young cyclist as he takes to the saddle on the Bournemouth Cycling Centre track.
It is a replica, of course, but it serves a far greater significance other than the said child’s aspirations: cycling is on the rise in Bournemouth – and it’s accessible to everyone.

The outdoor track, nestled in Slades Farm Park in Ensbury Park estate, is establishing itself as a haven for youngsters and adults alike wanting to hone their skills on the bike.
And once the skills are acquired, it is a discipline of Britain’s fastest growing sport which most undeniably become obsessed with.

“There’s definitely a big demand for riding the track, our youth membership has gone up,” says Graham Hurst, a Poole Wheelers rider and one of the Centre’s 12 qualified track coaches.
“To paraphrase a young person’s expression, it’s cool and the young riders have people to look up to now, such as Bradley Wiggins, Chris Hoy and Laura Trott.”

The mandate of the coaches is to get “more people to enjoy the sport, whether that’s on the road, on the track or social riding,” he added.
“It’s nice to have three clubs in the region with a wide spectrum of riders.”

Another coach, Jason Falconer, is well-placed to elaborate on what is being done to increase the number of cyclists in the South West.
Jason leads school sessions and his catchment area stretches as far west as Weymouth. Put simply, the track – opened in 2011 - is becoming a hotbed of sport in Dorset. Everyone wants a piece of it.

“It’s the development of the sport we’re focused on,” he says.
“I coach kids from Wey Valley, in Weymouth, from Ringwood, Wimborne, across the Bournemouth and Poole area. They all love it and as the sun comes out schools want to do alternative sports and hire the track, the bikes and the coaches. We’ve got a lot more of a programme being offered this year, for all ages, and I really think this can be our best year ever.”

Jason paints a picture of what it is like riding around the 25 metre banked circuit: “It’s an adventure, the sheer adventure of riding a brakeless track bike for youth and adults is amazing.”

Roger Papp, of Bournemouth Arrows, is in charge of the accreditation that all riders have to obtain before they can race on the track. However, it is not daunting - the skills are easy to acquire and allow anyone to ride on the track.“The accreditation is to ensure safety in groups,” he said.

“It’s never an issue and we make sure everyone gets through it stage by stage. We teach them how to ride properly and the emphasis is on gaining the track skills. The work Jason and the other coaches do develops them and allows them to move onto the club scene if they want to. During May to August we get over 2,000 users on the track.”

Jason’s coaching sessions account for a large proportion with 519 children taking up sessions last summer.
They hire the Centre’s track bikes at £3 and sessions cost as little as £2. It really is open and available for anyone.
To find out more Bournemouth Cycling Centre click here or alternatively click here to find out how to attend a Poole Wheelers Saturday club session.