Caring for children in Boscombe

Figures obtained by The Rock show that 21 of the 34 children who were adopted through the Council last year were from Boscombe and surrounding wards, even though agencies and charities constantly attempt to improve the living standard in the area.

Heather Freeman, Team Manager at the Adoption Services Team, believes these numbers reflect the fact that Boscombe has significant social problems, despite the effort from the council and other agencies to make improvements.

She said: “Social workers and the courts start from the perspective of keeping children with their birth families wherever possible, by providing support for them to do so. It’s only in situations where that is not possible that the courts will make placement orders which are the legal orders which give us authority to place children for adoption.

“The significant harm threshold has to be met for courts to grant placement orders so the usual reasons will reflect family backgrounds where drug and alcohol misuse, mental health problems, or domestic violence feature - or a combination of all of those factors, and where support has been offered and hasn’t led to the necessary changes for the child to be safe.”

Heather also added it should be taken into consideration that these numbers vary from year to year.

One of the agencies doing their best to improve living standards for children in the area is Boscombe Children’s Centre. Manager Justine Greenfield said they work with children up to the age of five, offering midwife services targeted to parents struggling with drug and alcohol abuse, and various parenting skills programmes and support groups.

She said they would be able to help more children if they had the resources: “Everything is being stripped bare. Money and staff is cut down, and with that somebody is going to fall off the edge. It is a lot of emotional investment in this work, especially where a concern is raised and families need your support. There is only so much work one person can do.

“We see investigations of where a child is injured or died, as the local safeguarding authority issues reports which aim to show where lessons can be learned in future cases. I just think it is things that are being missed or not picked up on because people are overstretched and I think it is a real shame.”

Ms Greenfield added she would have liked to give more parenting skills courses, and make parents understand that asking them for help does not mean they are going to lose their children.

She said: “We have had parents calling us saying ‘I can’t do it, I’m right on the edge and I don’t know what I’ll do if someone doesn’t help me’, so people feel that they are safe and they can tell us they are really struggling. And that’s a positive step, when parents are checking themselves and know that they have reached their limit.”

The independently funded Salvation Army also works to improve living standards within Boscombe families. Major Carelle Begley said their Parents of Toddlers programme is full every Wednesday morning, with as many as 25 parents attending each week. Leading up to Christmas the charity will also provide food hampers and toy parcels for the less fortunate children. Mrs Begley said: “We have lovely parents who seem to cope well with their children, but we are aware that in Boscombe there is a lot of need.

“Coming up to Christmas we will make hampers and toy parcels, and a lot of them. Social services will tell us where they see a need and they will come and collect them. We also pick up people that we know as well and deliver toy parcels and food hampers. So there is a great deal of need. A lot of people come here and don’t have family backgrounds, and that is where they need the support really, of the Salvation Army.” 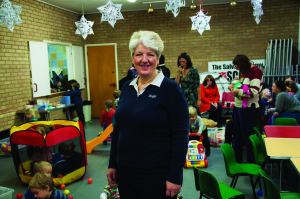 The Salvation Army’s Parents of Toddlers group is largely self-sufficient, relying on the membership fee and a small contribution from parents. But Carelle still calls for more affordable centres like the one they provide to help the large number of children in need.

She said: “We need more affordable places for parents, particularly mums who are a bit more isolated so they can get out of the home to meet others and to have support. From time to time we will have people come in and talk to them about where there is help they can get. And we always display leaflets from different centres as well. I think it is just being available really, and letting more people know that they can get support.”

Mother-of-three Joanna goes to the Parents of Toddlers group every Wednesday, and said she does not know what she would do without it.

“I have two boys and a girl and they love it here. It’s brilliant to have this opportunity and I don’t know what we would do without them [Salvation Army] helping us. It’s a place where kids can play, and meet up with other kids. It’s amazing.”