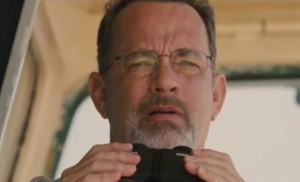 Tom Hanks’ latest release, Captain Phillips, tells the story of real-life Captain Richard Phillips who was captured by Somalian pirates in 2009. While transporting cargo to Kenya aboard the Maersk Alabama, Phillips’ crew was attacked by pirates and the ship was hijacked. A series of events, depicted within the film, led to his abduction and subsequent ordeal, trapped within a tiny lifeboat fearing for both his life and the lives of his crew.

The film cuts between scenes of Phillips and the pirates themselves, illustrating what drives young men to this dangerous livelihood and the reasoning behind their ruthlessness. It is tense, with the situation rapidly changing and the pirates just as uncertain as Phillips about how to proceed and what will happen.

The main problem with this film is the camera work: it’s shaky and rocks, to give the feeling that you’re on a boat. Anyone who suffers seasickness will probably be fed up of the rocking after about ten minutes. Luckily, these scenes don’t last long, and it’s much easier to appreciate the wider, calmer shots. The acting abilities of the pirates (chosen in a casting call) are a little dubious at times, but Barkhad Abdi is impressive as the leader and Tom Hanks, as usual, steals every scene. The other problem is the run time of over two hours – it’s sometimes easy to get a little bored instead of being on the edge of your seat. Despite this, the film is admirable, especially in its efforts to empathise with both sides of the situation.

The film has many praise-worthy points however. First and foremost the performance of Tom Hanks; he does well as a man trying to cope with a terrifying situation, all while maintaining a tricky Massachusetts accent. He continually shows what a versatile actor he is and his final scenes are the most touching and impressive. The scenery is overwhelming, switching constantly between massive cargo ships, tiny fishing boats, empty waters and crowded lifeboats.

The final thirty minutes is harrowing, but the most gripping. For those who remember the news coverage and those who are new to the story, Captain Phillips is a must-watch, with stories of modern-day piracy still grabbing headlines years later.