Marvel’s Captain America: The Winter Solider has blown the oldest Avenger out of the ice and into S.H.I.E.L.D.’s fire. 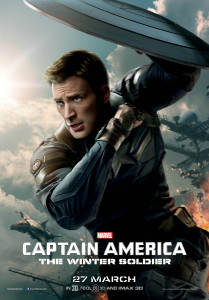 After the Avengers Assemble, the Phase 2 movies (Iron Man 3 (2013), Thor: The Dark World (2013), Guardians of the Galaxy (2014) and Avengers: Age of Ultron (2015)) have got Marvel’s successful reputation to maintain. The Winter Solider, in its own right, is a remarkably entertaining blockbuster.

Old-school Steven Rogers (Chris Evans) turn his patriotic ways into a 95-year-old badass the world has ever seen. As he struggles to embrace his place in the modern world and battle a new threat; the Soviet agent known as the Winter Solider (Sebastian Stan).

And with every Marvel adventure, there is teamwork and they are in the faces of the ass-kicker Natasha Romanoff/ Black Window (Scarlett Johansson) and newcomer Sam Wilson/ The Falcon (Anthony Mackie).

The cast all play their roles exceptionally well, including Samuel L. Jackson as Nick Fury and bringing Robert Redford as Alexander Pierce on the board the Marvel Express was impeccable.

The Russo boys brought us the simply exceptional film in every way. The edginess delivers the best, grittiest, action and this old-fashioned-thriller is as complex as is it fun.

Sad to say that there are a handful of scenes that can be predicted a mile off and whether or not you already knew the ‘secret’ identity of the Winter Solider, the reveal is a tad flat.

The Winter Solider is action-packed, and fast pace blockbuster with its witty moments. The Russos’ made a mark on the Marvel franchise.

Is it perfect? Maybe not but it does not raise any boring flags. There is plenty of action and beautiful character moments to keep anyone satisfied. The Winter Solider is a superhero blockbuster pleasing to the eye, with soul and subtle humour. Totally recommended!