The charming, powerful and sensational film that takes you on the life journey of the white house butler. 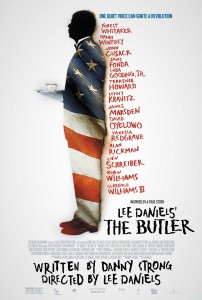 The Butler depicts the life of a butler who serves his country by looking after the President of United States in a compelling and engrossing film.

From 1950s to 1980s, Cecil Gaines (Forest Whitaker) is the long serving butler at the White House and demonstrates how one man can be different when at home and at work. Even though the entire film is basically an insight of what the butler saw day-to-day, Whitaker is a tremendous actor. The director, Lee Daniels, brings the film to life with the breathtaking and remarkable retell of Eugene Allen’s story.

Oprah Winfey blooms as a terrific actress and we see her move from strength to strength, ranging from her role as Sofia in The Color Purple to Gloria Gaines in The Bulter.

In total there were 5 Presidents that feature in the movie: Eisenhower (Robin Williams), Kennedy (James Marsden), Johnson (Liev Schreiber), Nixon (John Cusack) and Reagan (Alan Rickman). The one who stood out was Marsden as J.F. Kennedy, as brief as it was, he gave a performance that was sincere.

Here is my audio review of the memorable scene between J.F. Kennedy and the Butler: http://youtu.be/9w310y-op6o

The film, inspired by a true story, gives a dramatic story-telling of a man who was a fly on the wall. The way that Cecil Gaines was seen as a butler with no political opinion and also seen as scared and protective father  is intriguing and emotional.

Lee Daniels gives the audience a perspective of what it was like living in the 1950s onwards for black Americans. No matter how terrifying and unhumane the citizens of USA were to black Americans, Daniels did not shy away from the horrors of racism. It is undeniable how powerful the events are portrayed.

This film is never dull and keeps you entertained till the end, even if the ending is a little emotional.

The Butler is a must see film, with the main theme of family that everyone can relate to.