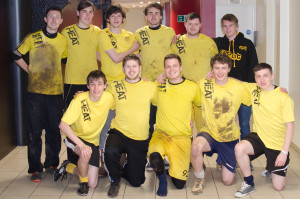 The Ultimate Frisbee team outperformed their tenth-seed status to qualify for the national tournament ©A.MOSS

Heat beat Swansea University’s first team 11-4 in the Nationals playoff of the BUCS Western regional tournament in Bristol and claim a spot at the national tournament next month.

The result saw BU’s side leap from their rank of tenth seed before the event to finish in sixth position overall in the region.

Second year Marketing student George Munden secured the improbable victory with an athletic catch in the End Zone, sparking scenes of celebration from the Bournemouth players.

Shepherd continued: “The spirit for the whole tournament was great in what were horrible conditions at times. It was so nice for him [Munden] and the rest of the team to get that victory because we were playing so well and they all really deserved it.”

The team, which contained no less than four rookies, played eight matches across the two days. Matt Morgan suffered a sprained ankle in the very first match of the tournament which forced him to watch from the sidelines for the remainder of the weekend.

Despite this early setback, the team were able to beat opponents from Plymouth, Bristol, Bath and Winchester on their way to the final.

First year Psychology student Henry Pym had been playing less than six months prior to the tournament. “I’m chuffed and really proud to have qualified for nationals,” he said. “To be in my first year and have been able to do this is great – I’m over the moon.”

The result marks the third time Heat will appear at a BUCS National tournament in four years, an achievement made all the more significant given the squad started the 2011 season with only four university players.

Shepherd said: “We narrowly missed out on Nationals qualification in the last two years but I knew this time all I could do is prepare the team as well as possible. It’s a great relief to qualify and a fantastic reward for all the hard work the team has put in.”

With the squad set to lose at least six players to graduation this year, April’s national tournament will provide invaluable experience for the team’s first year members.

Rookie Pym is excited about the challenge of competing at National level in his first year playing the sport: “It will be a big step up and I think it will be a great experience for my future playing career. I’m really looking forward to it.”