ANGRY students claimed the Bulgarian government was destroying their country during a demonstration at Bournemouth University.

Around 20 students from every school across all years gathered on Talbot Campus, bringing with them Bulgarian flags and leaflets. They also posted pictures online to show their support for the #OccupySU movement, which was started by Sofia University (SU) students on October 23, as part of a wider anti-government protest. 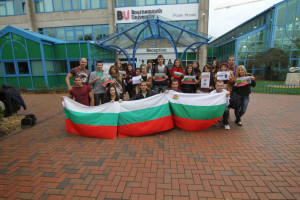 Bulgarian Students at BU protesting against the actions of their current government. Anna P. Mazzini

“We are showing support to the students from our country who have been really active in the protests against the government that robs and destroys our country,” said Kerrie Dimitrova, a 19-year-old Communication and Media student at BU.

“The main organisers are students, who believe that the intelligent young people with education must have the right to determine their own future.

“We are protesting against the actions of the current cabinet, which weaken the relative well-being of our country. They are about to borrow enormous loans, and this will have a huge impact on our lives. We will be the ones to pay for them. The decisions that they make are completely out of touch with the people’s needs and the present situation in our country,” said Kerrie.

“It’s the first time such a thing has happened. It’s like a student revolution,” said BU Student Lyuboslav Lyutskanov, who took part in the event at BU.

Many Bulgarian people move to the UK, and BU Bulgarian Society has more than 110 members.

“[The] UK gives me a lot more opportunities to fully develop my potential,” said Kerrie Dimitrova.

After the previous government resigned in February this year following mass demonstrations, a new left-wing cabinet was elected in late May. But the concerns about austerity, living costs and education are still strong in the poorest country of the European Union.

Most of the students agreed on the fact that the living conditions are getting worse and that the possibilities for young people are getting fewer.

The new government was fragile from the very beginning. The Socialists had to form a coalition government with the Turkish minority party - whose members were blamed for the death of seven people in a terrorist attack - to get a bare majority. Barely two weeks later the protests started.

The last straw broke when allegations of corruption and shady ties between politicians and businessmen rose after controversial media mogul Delyan Peevski was named as head of DANS, the Bulgarian state security agency, in June.

Since then, and even after Peevski resigned, hundreds of protesters have been constantly demonstrating in Sofia. But there has been no significant reaction from the government in response to the demonstrations.

At the end of October, Bulgarian students took part in the protest, hundreds of them blocking the
access to Sofia University, calling for the Prime Minister Plamen Oresharki to resign and asking for early election.