Students at Bournemouth University have joined a global campaign to free three Al Jazeera journalists imprisoned by the Egyptian government. 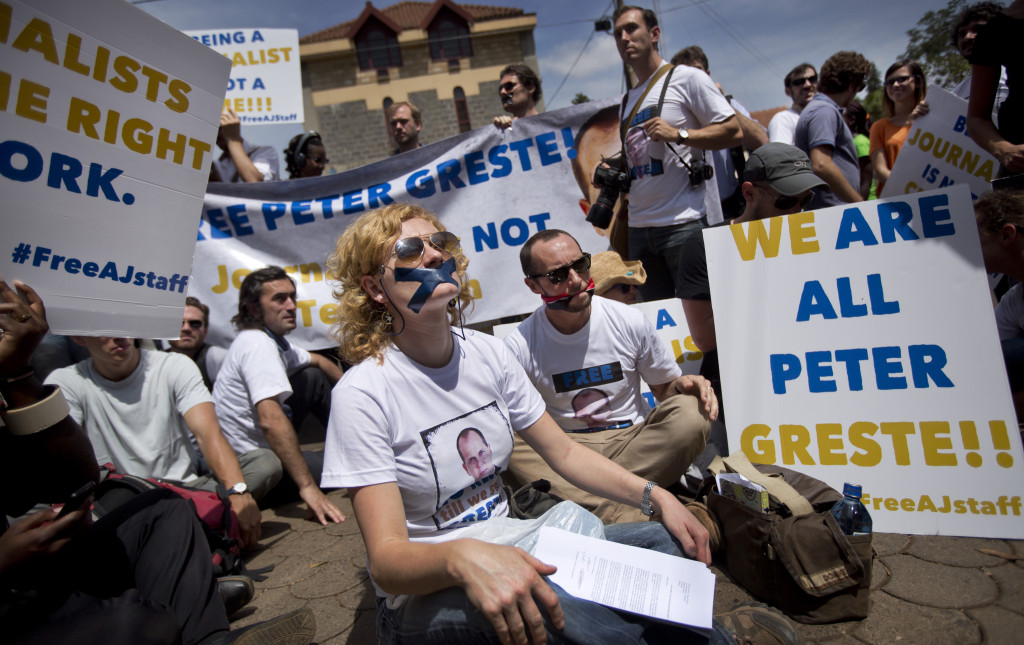 As part of the campaign, students have been popularising the #FreeAJStaff hashtag on Twitter and tweeting pictures of mouths taped shut in defence of free speech. #FreeAJStaff is a global campaign fighting for the release of three journalists, working for the international broadcast network Al Jazeera in Egypt. They have been imprisoned in Egypt after illegally meeting with the Muslim Brotherhood, which has now been classified a terrorist group by the country’s military government.

Bournemouth University journalism lecturers Mat Charles and Vanessa Edwards have championed the cause among students, as both have worked with jailed reporter Peter Greste. Mat regards the campaign as a huge success. “It’s really important that the journalism industry comes together when something like this happens. “When you have networks like the BBC, Sky and CNN all coming out and joining the campaign to call for the release of these journalists in Egypt, it helps people realise the importance of journalism and what can happen when journalism isn’t allowed to operate freely,” he said.

The Twitter campaign has had a huge impact in creating awareness of the imprisoned journalists. One former Bournemouth University alumni, Simon Torkington, now programme editor for Al Jazeera, tweeted: “Your support means a great deal to us”, in reply to a photograph on Twitter of Bournemouth students brandishing the hashtag and duct tape.

Mat also emphasised the importance of students engaging in the campaign. He said: “It’s great to see students here supporting the campaign and showing support for those journalists who are on the front line of the fight for press freedom. “When you’re on a course in Bournemouth and you’re busy with assignments, you forget about the global issue of press freedom.”

The imprisonment of journalists has also encouraged first year students at Bournemouth University to think about the industry. Tomás De La Rosa, one of these students at BU, said: “The importance of the campaign for trainee journalists lies in the fact that campaigns such as these develop a sense of awareness of our surroundings and colleagues. It teaches students that injustice is far more common than we believe and exposes the reality of the profession.”

The three journalists have been detained since December 29 after the Egyptian interior minister said they had illegally met with the Muslim Brotherhood, declared a terrorist organisation by the military government that ousted previous President Mohammed Morsi.
In January, Egyptian prosecutors said the three Al Jazeera journalists were being detained on suspicion of using unlicensed equipment, broadcasting false news and possessing fake footage.