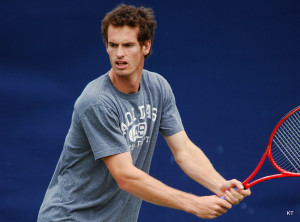 Rich Irwin, the coach of the both the men and women’s Varsity tennis teams, spoke to The Rock about the teams’ progress, the professional game and one special match 10 years ago.

“I beat Andy Murray back in 2003,” he said. “I was 17 and I believe he was 16. It was at a junior international event in Edinburgh and I beat him in straight sets.”

When asked if he saw the amazing potential from the Scot, Irwin has an interesting insight.

“To be honest I do not think anyone could have said he would be as good as he has become.

“He was always a very talented player with masses of ability and was also fortunate in the sense that his mum was in charge of Tennis Scotland he was always going to get the opportunities to potentially make it.

“He wasn’t the hardest worker back in the day and I’m sure he’d even admit he was quite lazy as a junior.

“Today he is a ridiculously hard working professional – a truly world-class tennis player who will go down in history.”

Irwin is pleased with the start the University sides have made to their respective seasons. The men’s second team currently sit top of the table and Irwin reflected on their success.

“So far they’ve been brilliant but there’s still some crunch matches ahead that we need to win.

“So far it’s been a great season and the atmosphere among the teams is exactly what we were seeking at the start.

“Women’s 1sts have fought so hard in all their matches in what is probably the toughest league in the country but have enough to stay up.

“They find themselves in a fight against four other teams and will need to keep going right to the end to avoid relegation,” Irwin added.