Bowie once said of himself : “I don’t know where I’m going from here, but I promise it won’t be boring” and this is something he stuck to for the entirety of his life.

Through recognising the need for a form of progression in rock music he assisted in the revitalisation of the genre, allowing change to be a positive thing in the creation of glam rock. This has assisted in the progression of creativity within music as he influenced current day stars. With his constant reinventions and freshness every time he came on stage Bowie was not afraid of testing the waters with new ventures. From the beautiful clothing of Ziggy Stardust to the perfect portrayal of The Goblin King which affected young and old alike, Twitter user Marzilla said of his performance: “David Bowie will always be my Goblin King,” he has influenced far and wide.

Bowie has become something of a  ‘music chameleon’ changing trends and dircting the current of music even if he was working against the tide. Bowie once said that he “always had a repulsive need to be more than human” allowing him to push barriers and go above and beyond due to his desire to stand out from the crowd.

“I am an actor, my whole professional life is an act!” With his genius facade up, Bowie was able to create something more powerful than many others before him. Described as having the same musical influence as Frank Sinatra and Michael Jackson, he was able to take what he was given and run away with the streams of ideas that were seemingly bubbling over in his head.

Marilyn Manson said this week how Bowie “Changed my life forever”. While Manson spoke for all of the gothic kids of a teenage generation, Bowie allowed children and teenagers who didn’t feel like they belonged to have a safe place to hibernate. His music and his opinions were accessible for people from all walks of life and allowed eccentric personalities to feel ‘normal’ in a world they felt obscure in.

His fashion developments have allowed artists and individuals to push the boundaries on their wardrobes. His infamous appearance on Top of the Pops in 1972 where he donned a metallic jumpsuit and flourecsent red hair allowed pop culture to blossom and in turn, he was able to create a fresh look in an otherwise mundane situation, pathing yet another pathway to originality.

Not many artists can go from performing in outrageous fashion to joining Bing Cosby on a Christmas track while still maintaining their cool factor. Bowie managed just that with his duet with Cosby performing The Little Drummer Boy/Peace on Earth in 1977 whilst still maintaining an edgy persona. This allowed people who wouldn’t have necessarily heard him to induldge in the pure artistry of Bowie, developing the musical choices many people had access to.

Overall Bowie revolutionised the  music scene throughout his career. He managed to sway entire generations to enjoy his music, even having his track Space Oddity feature on the 1969 moon landing.

Bowie orchestrated his life perfectly. From the invention of Ziggy Stardust to the perfect planning of his final album and music videos, he was able to create a career that left people dying for more.

Up until the last moment he was constantly creating in a perfectly systematic way. He kept his private life private, having hidden his illness for 18 months, yet still managed to pass away in an elegant and sophisticated way, keeping David Bowie’s legacy well and truly alive.

Nile Rodgers called him the “Picasso of rock and roll,” Lorde said that she “never met a hero of mine and liked it. David was different.”

In a world of doom and gloom to leave such a positive impression behind is both impressive and professional, something Bowie had a reputation for being.

Bowie sold the message of individuality with vigour and will be sorely missed by many: “I’m just an individual who doesn’t feel that I need to have somebody qualify my work in any particular way. I’m working for me.”

A ridiculous human doing creative type things by the sea. 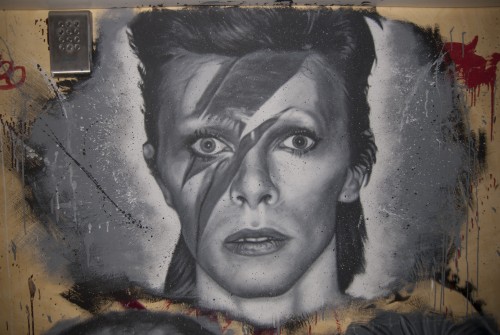 The Thin White Duke to Major Tom, Ziggy Stardust to the authentic David Bowie. The man born Davy Jones in 1947 has been through a variety of personas each one showcasing his brilliance and individuality as not just a ground-breaking musician but also as an experimental artist with intense shock factor.

A film review on the Lili Elbe biopic with Eddie Redmayne and Alicia Vikander, The Danish Girl.

Local based saxophone played, James Rawlinson talks about his music career and his future.