Jody Hall and Ben Selby of EGO Video Productions took to the streets in Bournemouth to help the homeless, working together with Charity Turn Your Back UK. 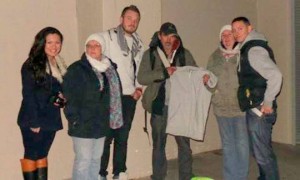 The idea for the event came about when Jody Hall attended the Christmas Lights Switch On with his daughter. “She noticed a homeless person and asked me why he wasn’t wrapped up in clothes like we were and why he didn’t have anywhere warm to go”. This encouraged Jody to ask friends to donate and film peoples’ stories of homelessness.

The group circulated the town, giving away clothing, blankets, sleeping bags and food to the homeless.
“We were donated Pizza from Centro Pizza and boxes of chips from Roosters to hand out to the homeless, but most of them told us they had already eaten at the Soup Kitchen, which clearly is a lifeline for these guys” Says Jane Ormerod - Founder of TYB UK.

“It was interesting meeting the few homeless guys that we managed to contact” Jane added, “They all had stories of hardship and homelessness to tell, which was very sad to hear” 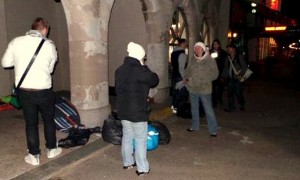 The group also met a man who had made a shack for himself. Jody Hall said “He preferred to live this way than with other addicts in sheltered accommodation as he is scared people would hurt him and also, living with other addicts would be too much temptation.”

The group will be doing another charity drive soon after this events great success.