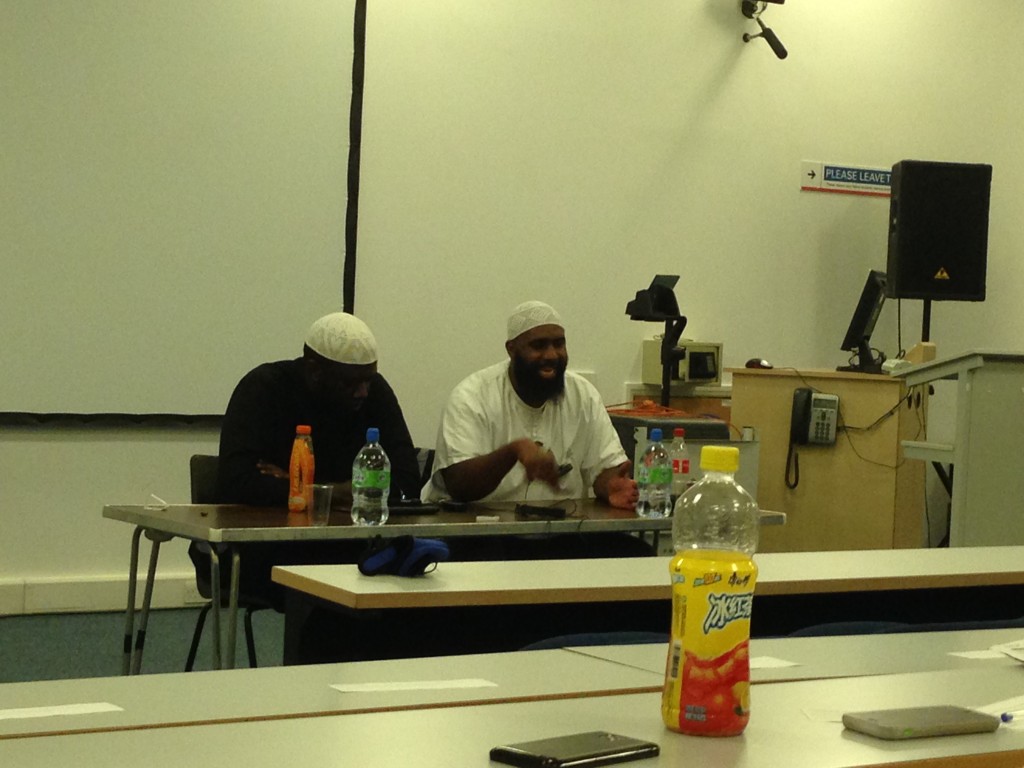 A large group of men, wrongly claiming to be from the counter-extremism think tank Quilliam, attended the talk and posed some difficult questions to converted Muslim speakers Hussein Thomas and Musa Ugandhi.

However, a video uploaded to the Bournemouth EDL YouTube channel (embedded below) confirms that they are in fact members of the English Defence League.

Soon after the last of the two speakers had finished his address at the event, organised by BU’s Islamic Society, the group of English Defence League members entered into a heated debate with members of the society.

The EDL members posed queries about female genital mutilation (FGM), sharia law and the oppression of women in regard to the hijab, the head decoration that many female Muslims wear.

“What you see on the news is not from Islam,” he said.

“Your disapproval is with certain cultures, it’s not Muslim culture.

“FGM happens in certain places in Africa and Asia, but it doesn’t just happen with Muslims; it happens with Christians as well, therefore your issue is with the culture.”

One of the Bournemouth EDL members agreed, saying that FGM is wrong “no matter who does it”.

The representative recording the talk justified their presence.

He said: “The reason we’ve come here today is because we’re concerned that people have come to Bournemouth University to talk about Islam and there are components of Islam that are a threat to us and we’re concerned for our children who are of the age to be in university.”

The first speaker of the night, Hussein Thomas added: “You can have your concerns because it’s up to you to have them, but the first thing you’ve got to do is research.

“You’ve got to come to the table with some substance.”

The debate became so heated that one of the Bournemouth EDL members stepped outside the lecture theatre and paced back and forth before more members entered.

Audience members became particularly agitated when the men suggested that the Muslim women in the room were oppressed due to their decision to wear the hijab.

One woman shouted “do I look oppressed?” and another said that the EDL members were “oppressing us right now”.

A female Muslim in the audience urged the Bournemouth EDL members to do more research.

“You’re judging Muslims by the actions of minorities,” she said.

The debate ended with shouts and jeers from both sides.

In the YouTube description attached to the video, the Bournemouth EDL members describe the Islamic Awareness Week event as “A Night Of Cultural Terrorism at Bournemouth University”.

They go on to say that they had no cause to disrupt the event, but “would have emptied the building by what ever means necessary” in the event of discussion around jihad or the promotion of sharia law.

The English Defence League defines itself as “a human rights organisation dedicated to peacefully protesting against Islamic extremism”.

Its founder and leader Tommy Robinson formally left the organisation last year with the help of the Quilliam think tank.

Jonathan Russell, Political Liason Officer for Quilliam, told The Rock that none of the men involved are Quilliam employees.