In his first major exhibition, Alexander Dakers has been hosting his various styles of art at the Bournemouth International Centre in aid of Dorset Blind and Amnesty International.

The Bournemouth based artist originally from Argyll and Bute, Scotland, has been aiming to raise funds for both charities, through his unique varieties of art.

A main motivation for his artwork is his admiration for Amnesty International. The charity is especially important to Alexander because of the work they did to free his grandfather from political imprisonment in Chile.

“I personally lost quite a bit of money on the equipment and things like that. However, it was never in the considerations because we are giving something to Amnesty [International] to say thank you,” said Alexander.

Alexander’s grandfather Leopoldo Osorio was imprisoned in Chile – sentenced for 30 years – but with the help of Amnesty International he was freed after just three years.

“I look at it as something like a Nelson Mandela scenario. What he went through was unimaginable,” said Alexander.

Leopoldo worked with Chilean president Salvador Allende, who was overthrown by a military coup on September 11, 1973, led by Augusto Pinochet. According to a government report, at least 3,000 people were killed, while around 29,000 were tortured under the Pinochet regime.

In his last art show, held at the Norfolk Royale Hotel, Alexander raised £3,000 for Amnesty international.

Alexander was also raising money for the Dorset Blind charity at his exhibition. Walk up the stairs of the BIC and immediately in front of you is the Dorset Blind tent. Guarded from the rest of the exhibition, the tent conceals specially produced works that allow both the blind to immerse themselves into the exhibition. “I’m giving them that opportunity now,” said Alexander.

Before going into the tent, you are handed a blindfold, then guided round to the first of the piece. You’re invited to place your hands on the canvass, feeling each ridge and shape, put there by Alexander to help those with visual impairments share in the experience of the exhibition.

Alexander was keen to help out the local charity after being introduced to them and strongly supported the work they did. “That’s one of the projects that really grasped me. I thought what would you do if it was one of your children that was blind, what kind of opportunities are they going to have.”

But not only does this experimental artwork allow the visually impaired a glimpse into the sights we get to see at exhibitions such as Alexander’s, it also give us the opportunity to peer into their world briefly to realise just how much we rely on our eyes. “It does give us how lucky we are that we can actually see and what it’s like to be in their world for that split five minutes,” said Alexander.

Continuing on the trend of textured art, much of Alexander’s art come off the canvass. A number of his pieces are built up, adding a different dimension to that of just something behind a frame. Alexander discussed the various methods he uses, including working with “layers-upon-layers”, recognising this to be a weak point in his early career, admitting that critics comment on his work being too varied, which is something he hopes he can work on as he progresses in his art. 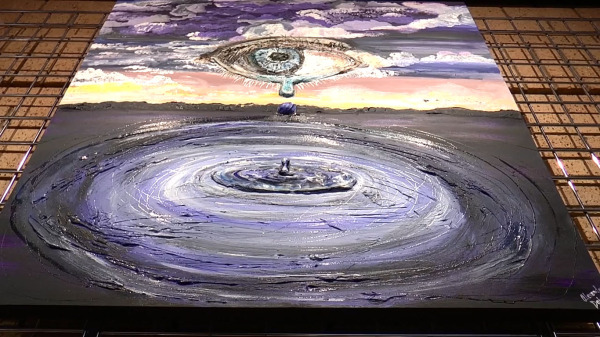 J. Wilgoose Esq and Wrigglesworth look like your average hipsters- but they’re not. They created a new genre of music, combining public information recordings with dance rhythms; they have created something that needs to be heard to be believed.

The Kaiser Chiefs predicted a riot, and they got one at their electrifying show at the Bournemouth International Centre.