Adam Worsley reflects on the Million Mask March held in London on the 5th of November, and explains why it was a night to remember. 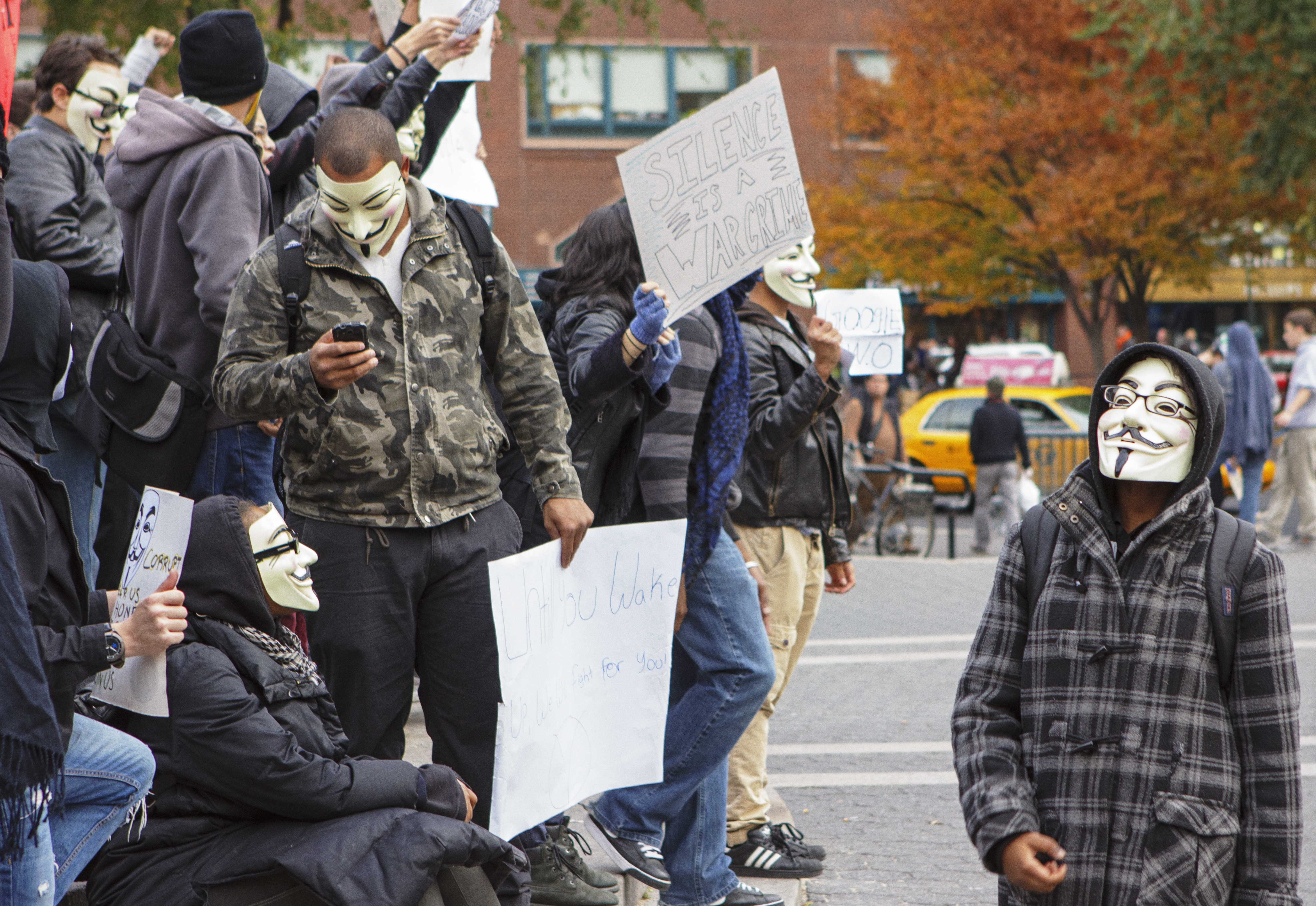 The policeman’s colleagues look at each other baffled, and one inside their ranks can’t take it; his eyes spin… his mind, which for years has been programmed to “think the right thing”, decides that this is too much. He’s freaking inside his head. His partner to his side notices his distress and motions at him to calm down. Fortunately, the two ghostlike girls move on with their dance, out, out into the crowd.

The police’s view becomes blocked by a crowd of demonstrators and a hint of disappointment touches a few faces before they remember that they must “act as expected”. They reattach their professional masks and return to starting dead-eyed at the crowd.

As far as the general accepted notion of what a protest should be is understood, London’s #MillionMaskMarch was a failure. It has been mocked in the media, branded as a bunch of burn-outs, hippies and druggies. Russell Brand made a half-masked, fully-arsed appearance and quickly became the figurehead for those outside of the movement.

This, along with both the haze of weed smoke that hovered above Trafalgar Square at 6pm on a weekday and the general positivity of the night prove these generalisations, if anything, are true. The people protesting are the first to agree; they are not the state’s version of an ideal citizen.

In much the same way this is not the state’s version of a protest. With no established leadership and no published list of demands, it has been difficult to grasp what the point of this alt protest. Similar to the ‘Occupy’ protests, the Million Mask March was echoed across the globe in at least 440 cities across every continent. There was at least a single protest in each Western country. Protesters believe these marches were a show of solidarity.

The vast majority of people attending have lost all faith in the “political game” that the ruling classes over the world indulge, and instead of attempting to fix the “corrupt, violent and elitist” system, they have decided to stop playing along. A man wearing a glittery blue eye-mask tells me that “I’m not here for myself, I live comfortably. There are those around the world, particularly in the Middle East, that don’t. This is because of the government that we have here - and we are the only ones with the power to change that.”

What things should be is rarely what they are, and, although not a traditional protest, the 5th of November was definitely something. In London on the Bonfire Night, at the very least, part of that something is a party. A couple of sound systems find themselves surrounded by masked figures raving to drum & bass. A few colourful smoke bombs. Chaos pads and rhymes, acoustic guitars and drums. The atmosphere is electric.

There’s constant movement, people flinging themselves around the square, bouncing off of the police lines. There’s a group of around 8 people huddled together, holding “stop the cull” signs. Behind them a middle aged couple are sat on the street, blissfully blazing. People have bought their children to this; some have even bought their pets.

The protest was mostly peaceful, with only a few scuffles between civilians and police. No blood was spilled, and only Oxford Street’s Topshop, McDonald’s and Starbucks saw civilians and police clash in what can only be described as a childish bundle. Lighthearted exchanges between police and protesters, although rare, show the truth behind the ideals of this movement; humanity is one common people, determined to have fun and love. Many protesters pleaded with police to forget their rank and join in, citing police budget cuts and warned of future tensions between the two groups if their differences were not resolved sooner.

This protest, although occasionally rippling with chants like liberal favourite “THIS IS WHAT DEMOCRACY LOOKS LIKE”, and the odd overly-hyped people shouting about “MUH FREEDUMZ”, the crowd was largely composed of reasonable individual voices. The police did a good job of cutting down the protest’s size during the march, but they had no control as the streets of London saw large groups of masked figures running through them in random directions with no particular destination in mind.

November 5th was an example of how it could be. With the exception of the brief moment Brand was unmasked, the masked protesters were each as important - or unimportant, depending on your outlook - as each other.  That being said, a significant proportion of this movement were unable to explain in any great detail how they could see the world being run better without tearing down the systems in place and starting anew.

One attendee, who gave his name as Asif, tells me about how he comes from a financially wealthy family. He claims to be here because “the Internet has given humanity a means to communicate that transcends almost all physical boundaries.” This has had a positive effect on the people, and enables them “if they desire, to find out exactly how the world is run and the selfishness of those at the top.”

Conspiracy theorists are at large, prouder and louder than ever. The recent NSA leaks have proved what the general accepted consensus amongst their ranks is; the government are watching everything. Many believe that it is foolish to trust anything that their leaders may say to them, and given recent evidence, it is not hard to see how they made the jump from docile citizens to an exploited workforce.

Asif views their message in an almost divine light; “it’s clear that all religions share a few basic messages in common with each other, namely peace, love and unity. We are the physical embodiment of that message.” He continues to talk about the coming of the “Age of Aquarius” and what this means for the human species; “a time of togetherness - unity, and brotherly love.”

No matter how delusional some of the ideas these people live their lives around sound, there is more than a little truth to each of them. Well versed in various “government-sponsored gangwars” around the world, they are quick to condemn the blatant disrespect for human life that some hold. The facts are clear; at no time do modern governments have their people’s interests at heart, forgoing them instead for financial gain. Protests do not work; the Iraq war protest saw over one million people attend in London, and many more around the globe, that were ignored by their governments.

It’s close to the end of the night. The police have broken up much of the protest, and only a couple of handfuls of rebel souls remain. They drink, smoke, chat. The police are bored; they want to go home - but they are more willing to converse with the protesters. Several views are held in common between, and the police listen to the knowledge that some in the crowd share with them with open ears. This was the point.

The meeting did not expect an overnight revolution, and any media that claims it was a failure because nothing happened (Daily Mail, Vice) should have attempted to see the proceedings from both street and global levels. The movement was a showing of numbers; a discussion of ideas, culture, and love.

“We don’t state our goals, our mission. it’s clear what this is,” Asif drawls into my ear; “and if some people are blinded to the truth behind our masks, then it is only a matter of time.” The immediate aftermath of the protest is simple; nothing will change. The protesters expect this, and they will be back next year with greater numbers, and again, and again, until those who hold power will have to listen.

Ghandi, when describing social movements, wrote;  “first they ignore you, then they laugh, then they fight back, then you win.”