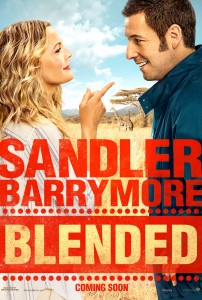 Adam Sandler and Drew Barrymore are well blended in this Rom-Com and are a magical pairing.

Blended is surprisingly good, but not as good as the Adam Sandler/Drew Barrymore predecessors.

After a blind date gone wrong, Jim (Adam Sandler) and Lauren (Drew Barrymore) agree to never see each other again and then everything changes when the two find themselves stuck together at an African family resort.

With The Wedding Singer (1994) and 50 First Dates (2004) on their 10 year collaborations, Blended is the newest film to their collection and the chemistry between Adam Sandler and Drew Barrymore is beautiful. They are definitely are a magical pairing.

Barrymore always brings out the best in Sandler and this film is better than expected, based on the critics flop predictions. This film might not be everyone’s cup of tea, but people who love Sandler’s funny nature will love this film.

Blended is a sweet comedy and brings out the funny qualities of Barrymore and Sandler’s characters and the children are an added bonus, as they are hilarious and add depth to Jim and Lauren humours nature.

A highlight within the film is Nickens (Terry Crews) and the Thathoo Harmony Group, who appears randomly, at the best moments and it will get everyone chuckling.

The location of Africa is breathtakingly beautiful and adds a bit of quality to the film. The resort which seems like a 5 star holiday makes you want to visit Africa desperately.

With every Adam Sandler film, the humour will be low brow, this is expected and it can be believed that he has lost he touch since the early 00s. Although Blended is a great film and better than the Grown Ups franchise, especially Grown Ups 2 (2013).

Blended is a funny love story that is great for guys and girls and people looking for an easy night out.