Believing in a God is weird 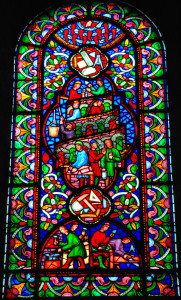 Despite what the title may suggest, this is not an atheist rant.

I am a Christian and I have been since I was a young teenager. I went to a Christian youth club, heard testimonies by the youth leaders and decided to dedicate my existence to a higher power.

But I freely admit that deciding to do that is really weird.

I think those with a faith struggle with criticism of what they believe in and I can understand why. I’ve had numerous times in my life where the mere mention of my faith is raised with ire and laughter. It’s upsetting to have someone instantly dismiss your views due to a religious choice.

The thing that has helped me deal with it is acceptance of how crazy what I believe in is. You need to have a certain sense of humility when you openly believe in an all-seeing man in the sky who created everything in the universe.

I think a lot of people who struggle with their faith and people’s reaction to it need to see the funny side. It doesn’t make me believe any less in my God, but I can freely admit it’s a bizarre concept. Taking things in this regard allows me to analyse my belief. Again, it’s a belief in something that, if you’ll pardon the pun, takes a considerable leap of faith.

Faith is the idea of believing in something that you have no evidence for. I have no evidence other than personal experience. I may feel like I’ve had a direct connection with God, but I have no way of proving that to anyone else. To some people it may even seem crazy to even entertain the idea that I could believe that, and that is OK.

We need to be able to discuss religious beliefs.

We need to be able to criticise, debate and ponder our existence. We can’t allow stubbornly held beliefs to disregard the new advances we as a species make in science and discovery. I welcome discussion of my religion.

If you want to tell me what I believe in is complete rubbish, that is totally your prerogative. When we have faith in something that is beyond our comprehension, that we have no proof of, it can seem terrifying. Humans need answers; we like to know exactly what is going on. That is why we endeavour through science to understand our world and religion is just another aspect of how we deal with a question we all want an answer for: why are we here?

I’m fine with my belief. It seems far-fetched to many, but I don’t mind because it feels far-fetched to me too. It’s okay not to understand sometimes and it’s okay to not have all the answers.

That’s just a part of life and I’ve decided my answer to those questions with a super being that decided the platypus was a good idea. It doesn’t have to make sense to everyone, as long as it makes sense to you.