Is BBC’s Sherlock catering too much to the wishes of fans?

Since Sherlock’s 3rd series started, it has become clear that “fan-fiction” and fantasies have had a significant influence on the plots of the popular TV show; even though writer Steven Moffat has denied the claim.

Increasingly ‘homo-erotic’ sub-plots have been included in recent episodes of BBC Sherlock, such as John Watson (Martin Freeman) and Sherlock Holmes (Benedict Cumberbatch) having significant tension when Sherlock left at the end of “His Last Vow”, where it can be argued that this was written in to make fans think he was about to confess his love for Watson. 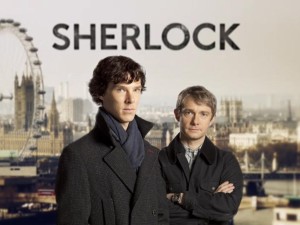 Also, in “The Empty Hearse”, Sherlock and Moriarty (Andrew Scott) are seen to lean in for a kiss after Sherlock ‘falls’ from the roof; a needless plot idea presented by a member of Sherlock’s fan club or a genuinely funny idea?

It is hard not to argue that this series of Sherlock has been the funniest yet, with hilarious lines such as “I don’t shave for Sherlock Holmes” and brilliant scenes such as John Watson’s stag night making this series unforgettable.

This series has seen major character development, such as Molly Hooper (Louise Brealy) and her ‘kiss’ in episode one, and her many violent outbursts since, and Mycroft (Mark Gatiss) and Sherlock’s family being introduced. Many new elements have been added and although only one major criminal has been dealt with this series, it has been a breath of fresh air to have a stop-gap and a bit of comic relief from the usually serious plot lines which Sherlock has.

Whether you agree that these link in too closely with fantasies that fans on the internet have written or published on websites such as Tumblr, it cannot be disputed that one of the greatest aspects of Sherlock is its amazing continuity and pace.

These new plots have, arguably, just added to the drama, with the impact of major plot twists, such as Mary Morstan’s, and funny scenes which offset the drama, it can be argued that this change in writing to make it more fan friendly is just giving the show more depth.

Even though Sherlock may be seen to include plots which make fans happy, it does in no way mean that the writing is any less groundbreaking or show any less phenomenal.