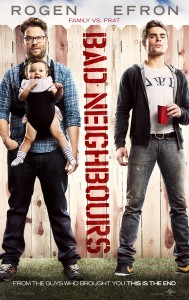 Bad Neighbours is a bawdy comedy that, although not to everyone tastes, is different from the other crude comedies. Bad Neighbours has plenty of crude and immature humour that is evenly spread between its well-matched stars. Mac (Seth Rogen) and Kelly (Rose Byrne) are trying to grow up and be good parents for their new-born baby. When a fraternity house, led by Teddy (Zac Efron) and Pete (Dave Franco), move in next door, they face unexpected difficulties. Hollywood has this idea that rude slapstick comedy is the only genre to make the audience laugh nowadays and, to clarify, this is not entirely true. From Adam Sandler to Seth Rogen, featuring crass behaviour is the height of the gag and sometimes they are hilarious and other times it is very uncomfortable, tedious and unfunny. Bad Neighbours is surprisingly refreshing, as the lewd humour is expected in a fraternity house, making the gags more realistic. The saddest part, though, is that the best funny moments are all in the trailer, but at least they are still funny to watch when put into context. Seth Rogen always plays the same character, the “fat, weed loving layabout” and has become a worn out and tired act recently. Bad Neighbours puts a twist into Rogen’s character by making him a parent attempting to put himself on the straight and narrow, making his character is amusing to watch. Zac Efron has come a long way from High School Musical (2006) and with the terrible That Awkward Moment (2014) added to his resume, Teddy looked like he was doomed to fail. Unexpectedly the frat persona suited Efron very well and he nailed it. Rose Byrne, of course, gives another one of her best performances after the success of Bridesmaids (2011) and showing that women are the brains of the outfit. Behind all the filth and outrageousness of the story, there is a lesson about growing up and becoming an adult. Whether its leaving your fraternity brothers and getting a job or becoming parents, there is a point in life when we all grow up. This film puts this perspective in a funny light. Bad Neighbours is quite different from other crude comedies but sadly this crude comedy will be forgotten in years to come.