A family who put the fun in dysfunctional and with a terrific cast, it’s worth the drama. 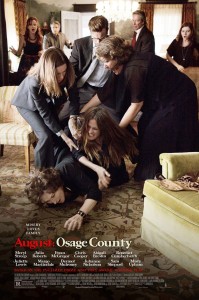 August: Osage County has 24 nominations, including five Oscars and it’s very easy to see the appeal.

Adapted from Tracy Letts’ Pulitizer Prize-winning 2008 drama play, August: Osage County is a hilariously dark and deeply touching story and it shows the raw observation of a household who are more than normal, they are a family.

It does take time for the film’s climax to come round, but when it does, all should prepare for the secrets to be in the open air and prepare to see the heartbreakingly sad moments.

The first dramatic moment is the dinner scene and Violet, the pill-popping and sunglass-sporting mother, insults and digs at everyone. Streep’s Miranda Priestly (The Devil Wears Prada, 2006) would look like a saint compared to Violet Weston.

We also see Julia Roberts in an outstanding new light; the profanity would put Vivian Ward (Pretty Woman, 1990) to shame. The connection between Streep and Roberts is so worth a watch.

Each of them has an individual characteristic; from rebellious to headstrong to quiet or sweet. Every moment within the film is worth every second and proves that every family fight, stand-up for one another and keep secrets. Each performance is terrific and worth every award nomination given.

August: Osage County has an incredible cast, charismatic acting and dark humour and I highly recommend it. This family put the fun in dysfunctional.